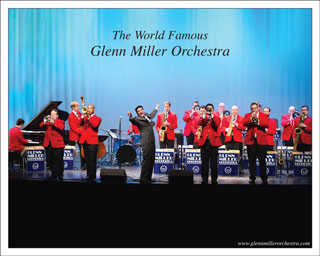 They have performed throughout Europe, Australia, Iceland, New Zealand, Guam, the Philippines, South and Central American. They've made annual tours in Japan for nearly 50 years, and have performed in all 50 states. Now, back by popular demand, The World Famous Glenn Miller Orchestra returns to UW-Parkside with it's legendary big band sound.

The World Famous Glenn Miller Orchestra is a fully self-contained group consisting of the music director, five saxophone players, four trumpeters, four trombonists, and three rhythm musicians (piano, bass and drums). Also, there are two vocalists, one male and one female, who perform individually and as part of The Moonlight Serenaders vocal group.

The Glenn Miller Orchestra has always been very musical, disciplined, and visually entertaining. And it has its own distinctive "sound." That sound is created by the clarinet holding the melodic line, doubled or coupled with the tenor sax playing the same notes; and the harmonies produced by three other saxophones, while growling trombones and wailing trumpets add their oo-ahs.

They are "on the road" longer and more continuously than any other orchestra in the whole world, having celebrated its 58th year anniversary on June 6, 2014. The group covers over a hundred thousand miles a year, with nearly 300 playing dates, working most every night for 48 weeks out of every 52, and performing for an "in person" audience that adds up to more than a half million people annually.

"In concert one year ago at UW-Parkside, The World Famous Glenn Miller Orchestra played to an enthusiastic sold-out crowd. This group appeals to all generations and when the opportunity came to have them back again, we jumped on the chance," said Karen Sorensen, Fine Arts events coordinator. "The Main Stage Theatre is available this year, which will allow for additional seating."

The World Famous Glenn Miller Orchestra will make its way to The Main Stage Theatre Friday, October 31st at 7:00p.m. Tickets are on sale now and can be purchased online or by calling the Rita Box Office at (262) 595-2564. Sorensen encourages early ticket sales to avoid long lines. "In addition to a fabulous performance, the Rita Bistro will be open at 6:00 p.m., and will serve a variety of snacks and beverages to enjoy before the show, including a special signature drink.  Join us and you'll hear why the Glenn Miller Orchestra is the most popular and sought-after big band in the world." Abundant free parking will be available in Lot B and C adjacent to the Rita Tallent Picken Regional Center for Arts and Humanities.