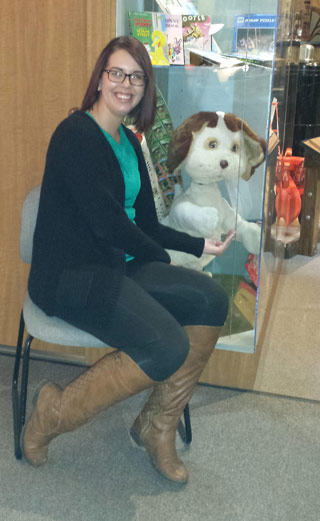 Crystiana Schlitz: On The Fast Track to Success

It's the time of year when many students are looking for summer jobs and internships. For others, like Crystiana Schlitz, this is the time to prepare for graduation. Crystiana has completed her Communication major, her Conflict Analysis & Resolution Certificate, and landed a supervisorial job all within 3 ½ years at UW-Parkside.

I wanted to know how she did it, so I set up a time to meet with her. Prior to college, Schlitz spent two years taking accelerated classes at J.L. Case High School in Racine. This allowed her to come to the university having completed a semester's worth of credits.

Although she may have been ahead of most of peers, it took some time for her to choose a major. "I had no clue," she admitted, "I didn't want to graduate and be locked into one thing." Since Schlitz always enjoyed talking to people, she figured Communication would be a good major because it's so broad. She doesn't regret her decision.

Schlitz saw early on how helpful the professors were in the department. "That's why I stuck with it," she said, "Usually, if I don't like a teacher, I'm out of there. I could go on for hours about how great the teachers were." Whenever she faced a problem, she was confident that she would get the help she needed. This is something she really began to notice after taking winterim and summer courses.

Aside from her impeccable undergraduate career, she also landed a job as a supervisor at the Racine Heritage Museum. Some of her duties are managing social media, marketing, accounting, inventory, and overseeing volunteers, a role she once held. Crystiana was a volunteer for just a month and a half – enough time to demonstrate her communication and leadership skills – when her supervisor left RHM for another job. Crystiana was then hired to replace her supervisor, a position she earned before even graduating from UWP.

I am in awe of how diligent and passionate Crystiana is as a student, a worker, and a soon-to-be Parkside alum. She is a member of Lambda Pi Eta, the national honor society for Communication majors, and recently received a UWP Academic Achievement Award for maintaining a high GPA. One thing Crystiana wants all students to know before she graduates is, "Parkside is a great place."

Schlitz was accepted into UW-Madison as well. Two weeks before her freshman year began, she transferred all of her credits to our university. Her decision was prompted from her fear of leaving home. Coming in, she only wanted to stay because of the comfort she felt being close to her family. Now, she wouldn't trade her experience for anything. "It's a positive campus," she said. She is really thankful for the great environment and the support she got from the Communication Department.

Even with all of her success, she is very nervous about graduating. Her level of anxiousness varies depending on the day. It's hard for her to wrap her head around the fact that she's ready for the real world. "I can't even buy beer for my college graduation," she laughed.

From this interview, I am confident in Schlitz's ability. She was set on graduating in less than four years, and she met her goal. "I'm prepared," she told me. I believe her.