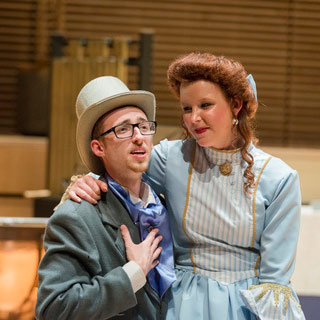 Saturday, April 18, 2015, was an enlightening day for me. I attended the opera, Gilbert & Sullivan's The Sorcerer, in Bedford Hall. I left the theatre raving because I was amazed by the talent showcased on the stage. The acting was great, the songs kept me engaged, and to my surprise, most of the performers were students.

The cast had been preparing for their debut for an entire year. Their hard-work was evident. It was amazing to see them transition from dialog to singing and dancing.

Tyler Eschmann played the role of Alexis, the protagonist that wanted to distribute a love potion to the entire village. I was able to see his acting skills along with the vocal ability he has been recognized for at the University of Wisconsin-Parkside.

Eschmann is a Music major who decided last semester to pursue a Communication degree as well. We sat down and talked because I wanted understand what prompted him to add another major after five years of studying Music.

"Music [is] my first love. It's part of my identity," explained Eschmann, who grew up in Racine. He knew from a young age that he had a passion for the arts. This appreciation led him to pursue a music career upon graduation. As the months inched closer to his completion, he began to question if this was the profession for him.

Eschmann dreamed of performing and touring the world. He always understood that it would be a difficult life to acquire and maintain. This was a challenge he was willing to accept, but the idea of having fame was unsettling. He has spent some time reflecting this past semester and has come to the conclusion that, "[A] regular life doesn't seem so bad."

Instead of trying to reach ultimate stardom, he wants his degree in Music to open doors for him to perform in annual operas or musical showcases. This deep love he feels for his initial major hasn't gone away, and the Communication Department is helping him grow in other areas.

He has expressed an interest in social justice. "My heart really resides in helping people," he explained. This is something he always knew, but it took some time for him to choose the right major. Initially, he looked into Psychology and Sociology until taking a public speaking course last fall and discovering that he was talented speaking in front of crowds. The decision was finalized after taking Comm 108 Media & Society.

As a Music major, Tyler hadn't been required to write a paper since he was a freshman. He faced some difficulty at first writing as a Communication major. Ultimately, he realized he had a talent for organizing his thoughts and portraying a good message through writing, too. Eschmann feels the Communication courses and the professors can prepare him for positions like radio, journalism, and human resources.

Concluding our interview I asked him, "What do you feel you can offer the Communication department?" He pondered his answer and he finally said, "The more I learn, the more I can teach." With only two semesters to go before completion, he is confident that the Communication Department will help him "find his calling in life." He has discovered his talents, and he is ready for the growth to take place.