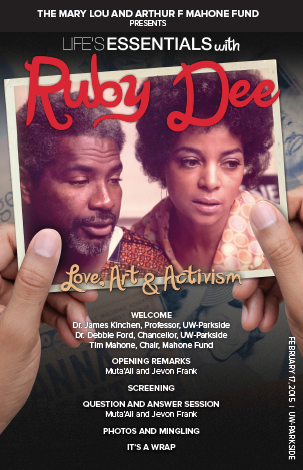 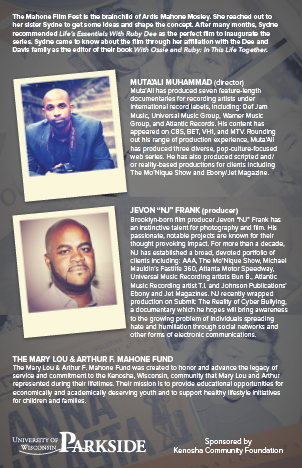 What Ruby Dee Taught Me

UW-Parkside's College of Arts & Humanities, in collaboration with the Mahone Fund and the Kenosha Community Foundation, co-sponsored the Midwest premiere of Life's Essentials with Ruby Dee on February 17-18, 2015 in the Student Cinema. Attending the premiere were director/writer Muta'Ali Muhammad, grandson of Ruby Dee and Ossie Davis, producer Jevon "NJ" Frank, and playwright Sydne Mahone, editor of Ossie & Ruby: In This Life Together, a memoir. During their two-day visit, the team met with students, including Communication major Cheryl Solomon who reflects on how their visit and the film touched her.

What Ruby Dee Taught Me

Love, art, and activism are three things I would love to say that I know a lot about, but I don't. I may be African-American, but prior to the film, Life's Essentials with Ruby Dee, I felt disconnected.

Ruby Dee's passion for helping the black community inspired me to think of my own life. She and her husband, Ossie Davis, were willing to put their acting careers at stake by turning down offensive movie roles; they wanted to rectify stereotypes and fight for equal rights. Off-screen, they gave speeches, worked with Martin Luther King Jr. and Malcolm X. They were so involved that the FBI felt they needed to keep a close watch on them. I wish I shared this same willingness to defend myself. A quote, which was written on shirts sold during the premiere, made me think of my childhood. Ruby Dee said, "I didn't realize it until I was grown how necessary it is for good people to be tough." The film helped me come to a similar conclusion.

As a child, I knew I wasn't white, but my racial identity wasn't something I put much thought into. This is my hair, this is my skin-tone, and this is the treatment I've received. I was born and raised in Milwaukee, WI. My mother enrolled me in a Catholic school when I was five years old because she felt that the education would be better. I remember being the only black child in my class, and I couldn't help but notice that I got different treatment. My teacher would take my prescription glasses from me the moment I stepped into her class, she pushed my desk to the back of the room behind a bookshelf, she wouldn't allow me to go to recess, and she would often send me home with behavioral notes full of lies. I was a kind, very talkative and well-behaved child, so this confused me. It wasn't until that I was a teenager that my mother told me why that woman gave me such bad treatment. "It was because you were Black," she said.

I attended Milwaukee Public Schools from second grade to tenth, so when I transferred to a predominately white, suburban school, my teachers assumed I was dumb because of my skin color; I was even called 'ghetto' by white classmates. I know it's wrong, and I know I don't deserve poor treatment, but I must admit that I had become complacent.

A year ago, I decided to minor in Ethnic Studies. I had classes with discussions about racial inequality. As a child, history books taught me that the United States of America is the 'Land of the Free' with equal opportunity. I was enraged when I learned this was a lie. The anger I felt manifested itself into every conversation I had about race. I felt sick to know that the moment I was born I was destined to be behind; I had no choice in the matter.

The film's director Muta'Ali Muhammed, Ruby Dee and Ossie Davis's grandson, stayed after to answer questions when the film concluded. It sparked emotions in me, but not in the same way as some of my peers. Many of them mentioned feeling enlightened, inspired, and hopeful. He made me feel understood, especially with his views on activism, which conflicted with his grandparents. A memorable scene from the documentary was when the director was filmed applying more layers of clothing. Each item had a notable saying or figure about the black community. For me, the layers symbolized the need for him to find his own voice. Even though he grew up with well-known political figures, he wasn't happy with the current state of the black community. So, he sought out to find leaders that could promote change. His struggle resonated with me.

During that time when I felt urgency for change, I found myself searching the web for black accomplishments. I wanted a great, black figure that was hardworking, capable, and knowledgeable about black history. I looked for all of these things in a leader because I myself didn't want to do the hard work. When my search didn't offer desired results, I gave up.

It's so easy to look for the good in others when I don't feel like building on my own potential. It's so easy to sit back, watch TV, and complain about there being no good roles models. Why can't I be the change I want to see? I had developed this idea that the only way to make a real difference was to be in a history book or to be known nationally or worldwide.

When Muhammad came to his grandmother with this issue, she encouraged him to dig deep and to stop looking for "…something to fight against, but something to fight for." I related this to the quote on the t-shirt. Being tough isn't about violence. It's about recognizing the pain and fighting for change. Ruby's opinions made me see that I need to find my own voice and begin to speak! She made me see that I, too, can make a difference. Even if I'm not meant to give well-known speeches like Martin Luther King Jr., I am important. The words spoken and the things I do in my short life matter.

I can honestly say that I did not recognize Ruby Dee or Ossie Davis when I was first informed about the documentary, but they made a huge impact on Muhammad's life and my own.

When the film concluded, my emotions were all over the place. I felt disappointed in my way of thinking, happy to find a new role model, open to change, and ready for the next steps to be taken in my life.

I am ready and I am capable; Ruby taught me this.