The Fish Bowl: The Rivalry of Northwoods League Teams, UW-Parkside Alumni, and Goldfish 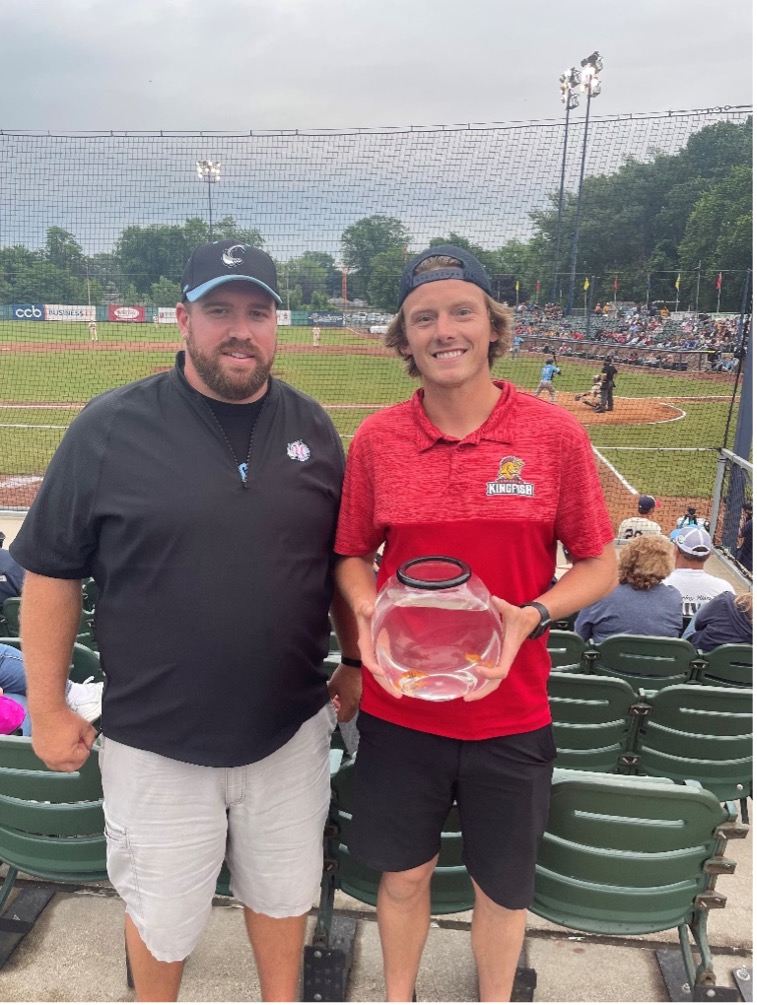 KENOSHA, Wis. – You may have heard of the Subway Series between Major League Baseball rivals the New York Mets and the New York Yankees, but what about the fishy battle between two Northwoods League (NWL) baseball teams on Wisconsin’s eastern coast?

What is the Fish Bowl Series?

This new series features two of the closest teams in proximity to each other in the league and is also a rivalry between two alumni ­of the University of Wisconsin-Parkside Sports Management program. Each team plans to face each other two to four times each summer and the games are split evenly for home and away field advantages. The summer of 2022 was the first season this series was played since being introduced by Bill Fanning, the owner of the Kenosha Kingfish.

The Kenosha Kingfish are in the Great Lakes East region and compete at Historic Simmons Field in Kenosha, Wisconsin. The two teams do not face each other every year due to being in separate divisions, but the league has been made aware of the rivalry and new series coming to the Northwoods League and may plan each teams’ schedules accordingly.

In the first-ever series between the two teams, they played four total games in a 10-day span from June 25 to July 4, 2022. The Lakeshore Chinooks took the first game on the road by a score of 7-6. The next day, the Chinooks returned home to put on a show for the home crowd and ran away with a 16-0 win. On July 3, the Kenosha Kingfish prevailed with a 6-3 win at home to avoid the series sweep before the Chinooks won the final game of the series at home by a score of 5-1.

Ryne Goralski, the General Manager of the Kingfish not only had to cope with the series loss but also became the father of two Goldfish until the two teams face off next. “The Kingfish look forward to continuing this rivalry in the coming seasons. It’s special that Eric and I get to be the “rivals”. We look forward to giving Elvis and Gill back to Lakeshore next year,” said Goralski.

Ryne Goralski is a native of Kenosha, Wisconsin and has been the General Manager of the Kingfish since 2018. Goralski is a UW-Parkside alumni of the class of 2016. He received his Bachelor of Science in Sports Management while also participating as a member of the UW-Parkside Track and Field and Cross Country teams. Goralski is still active in the UW-Parkside Sports Management program, working with senior students to solve problems in the industry and helping students complete their final undergraduate credits. Goralski was also a part of the UW-Parkside Sport Career Night that connects students aspiring to join the industry with local organizations for internships and career opportunities.

Eric Snodgrass is also a native of Kenosha, Wisconsin and a UW-Parkside graduate from the Fall of 2010. Snodgrass got his bachelor’s degree in Sports Management from UW-Parkside where he completed his 12 internship credits with the Lakeshore Chinooks. When the Chinooks organization officially launched in 2011, he began his career as the Manager of Ticket Sales.

In 2015, he was promoted to Director of Ticket Sales. In 2021, Snodgrass became the General Manager of the Chinooks. Eric remains an active member of the Sports Management program where he speaks to classes annually and often hires student interns for the Summer. Snodgrass was named the UW-Parkside Sports Management Alumnus of the year in 2018.

Gill and Elvis the Goldfish

You may be wondering, “Who are the Goldfish?” Since Kenosha was the first of the two teams to fall short in the series, they also gained the privilege of naming the two animals for the first offseason. The two fish have been named Gill and Elvis; after the names of the Kingfish mascots.

The Kingfish have already upgraded the tank for the fish and will continue to improve the home of the Gill and Elvis. Goralski states the two fish are being fed everyday by the Marketing Manager of the Kingfish, Justin Dade.