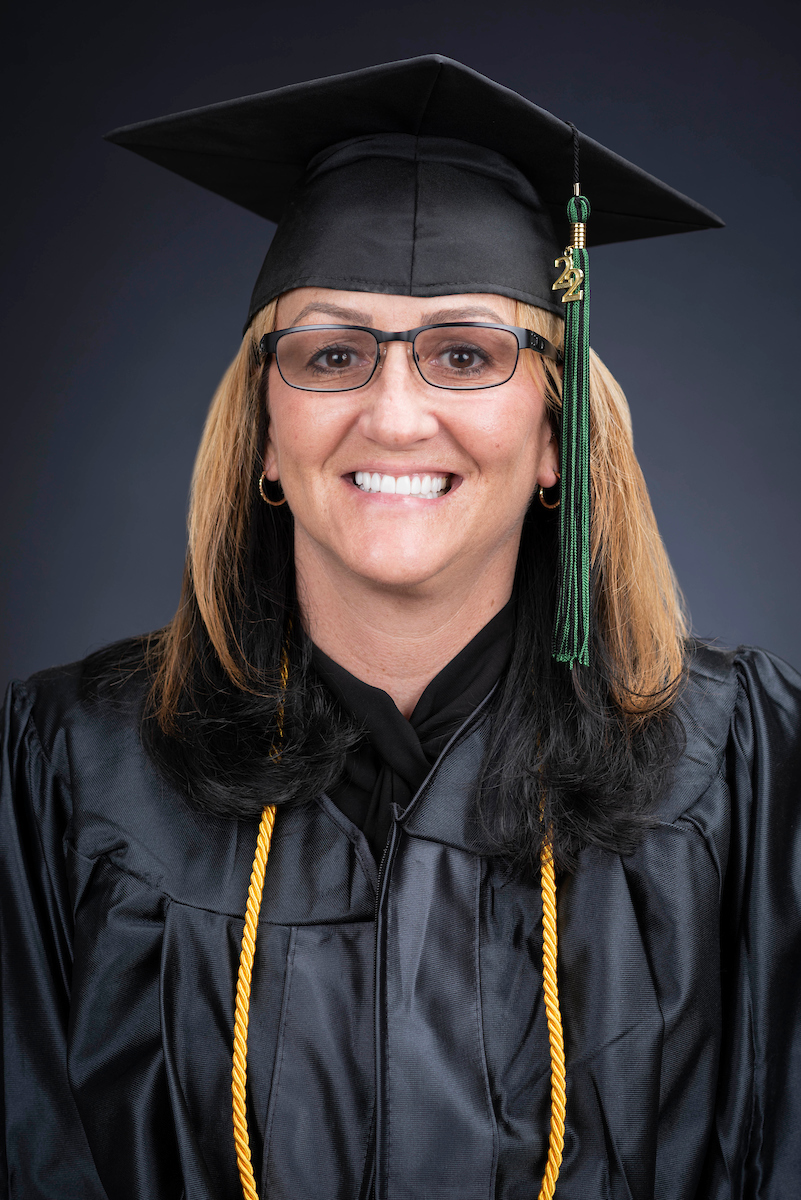 Take a quick look at the accomplishments of Kelly Burke over the past five years and you might think that she has either figured out a way to live without sleep or she is heavily invested in the Keurig and Nespresso companies. “Would you believe sleeping is one of my favorite things to do?” Burke says. “I do it quite often. Work, school, self-care, and sleep – that has been my life lately.”

Burke graduates from the University of Wisconsin-Parkside this spring as the Chancellor’s Award recipient, emblematic of the tops in her class. Along the way she has earned four majors: accounting, management information systems (MIS), marketing, and business management with a finance concentration. Burke is also completing certificates in project management and sales. Her academic record is exceptional. Burke was inducted into Beta Gamma Sigma, a business honor society, and completed a total of 128 credits at UW-Parkside with a near-perfect GPA of 3.989 (in other words, she only received one A-minus in all of her Parkside classes). Impressive? To say the least.

“I don't watch much TV, nor have time to spend on social media,” Burke says.

In 2017 she transferred from Milwaukee Area Technical College to UW-Parkside. “I also attended college when I was younger,” Burke says. But when she couldn't decide exactly what she wanted to do, she put college on hold. “I still have a hard time deciding what I want to be when I grow up,” Burke says in fun, “that's how I ended up with four bachelor's degrees and two certificates.”

As an older adult returning to higher education, Burke’s motivation to demonstrate excellence is beyond words. She works more than a full-time job as a quality-control supervisor. She and her husband, Anthony, live in Caledonia, Wis., with a blended family of eight children. “I have a wonderful husband who is retired from the military,” Burke says. “He knows how to cook, clean, do laundry, and take care of things around the house. This was very much a joint effort.”

Burke is not exactly sure of the moment, her educational experience clicked. “The change in attitude for me came naturally because I could see how passionate the instructors were about teaching their courses,” she says. “I started to thoroughly enjoy participating in class. The students were engaged and welcoming. My opinion is – if it isn't more than just ‘class,’ that’s because a person is making a deliberate attempt at not getting involved.”

Involved on campus and beyond

On campus, Burke serves as vice president of Accountants in Action, the university’s Accounting Club. Burke’s involvement in the club came by coincidence. The club’s president mistakenly thought Burke had applied for the position – she had not, be said she would be more than willing to help.

Burke served as an ambassador for Becker Accounting. She is a member of the Wisconsin Chapter of Women in Technology – an organization that promotes women’s participation in STEM careers. Burke even met with the Association to Advance Collegiate Schools of Business (AACSB) team as a student representative sharing her perspectives during the UW-Parkside business program mandatory reaccreditation.

Dr. Rizvana Zameeruddin, UW-Parkside associate professor of accounting, describes Burke as extremely conscientious and detail-oriented. “Kelly is especially inclusive of her colleagues in group assignments and projects, and respects her colleagues and the faculty alike,” Zameeruddin says.

Other faculty see Burke’s accomplishments as an inspiration to others. “In an age where we are seeking to increase women’s participation in quantitative and technical fields, Kelly’s achievements serve as a guiding light to future female students everywhere,” says Dr. Suresh Chalasani, interim associate dean for the UW-Parkside College of Business, Economics, and Computing. “For working adults, her accomplishments show that a work-life-educational balance is not only achievable but one can achieve exceptional and high-quality outcomes.”

Going back to class

When Burke decided to return to the classroom, her children were a big reason why. “I was nervous,” she says,” but I knew my kids were watching me and I wanted to give them the guidance I never had so that they could have a solid foundation in adulthood.”

She chose UW-Parkside because it was close and convenient. “At first, I just wanted to get through it; I was busy with work, home life, and now homework,” Burke says. “Soon enough, I got to know fellow students and teachers. I was participating in community-based learning courses and decided to apply for a study abroad trip to Cuba. I made the Dean and Provost’s lists every semester and was awarded the Falbo Scholarship and the Ruth Hall Scholarship.”

Burke also earned the university’s prestigious Academic Achievement Award each year. The award recognizes student success in the classroom and in the community. Here’s just a few other things Burke has been doing in her spare time:

“Rebuilding Kenosha” was an experience that Burke says especially stands out. “One of my former instructors invited me to be part of this initiative,” she says. “I was able to participate for a short while and it was amazing to see how people came together. We had open and honest conversations that really served to change the future of the community.”

Burke’s children were a big reason she returned to school. Now she’ll have the opportunity to study at UW-Parkside right alongside her oldest son who earned his undergraduate degree in information technology last year. “He told me he was applying for grad school – at UW-Parkside,” Burke says. “I couldn’t be prouder and I know he chose Parkside because of me. He saw how it changed me – it gave me confidence. It helped me to dream again.”

An M.B.A. might not have been on Burke’s road map, but curiosity and her son changed all of that. “I took an extra course in data analytics this semester because I was curious what would be taught, and if I would like it,” she says. “I ended up loving it – it is one of my favorite courses I have ever taken. When my son mentioned that the M.B.A. he found was offered though Parkside – that pretty much sealed the deal.”

Now that an educational journey toward four majors is almost complete, Burke says she doesn’t remember many times when it was unbearable. “I have always had my husband, kids, and family as a strong support system. In hard times, I usually complain at my husband and he gives me encouraging words to keep me going,” she says.

Burke also credits a strong sense of support from UW-Parkside faculty and staff, saying they care and are willing to go above and beyond to help their students succeed.

“I would have never thought in a million years, when I made the decision to apply to UW-Parkside that my life could have been so enriched by the people that I met - at and through the university,” Burke says. “My experience at UW-Parkside has been so fulfilling … I know I ended up at Parkside exactly when I was supposed to be there.”