When Dr. Adrienne Viramontes accepted the prestigious UW System Board of Regents Teaching Excellence Award in April on behalf of her colleagues in the Communication Department, she said the honor reflected their hard work and longstanding commitment to student success.

“We focus on teaching our students usable skills for most jobs, even those that do not yet exist,” said Viramontes, Communication Department Chair. “We look forward to working for our students so that they can determine the path to their own American Dream.”

If there is a person who understands and appreciates the American Dream, it is Viramontes. She grew up in Gary, Ind., swimming in Lake Michigan on miles of Gary beaches and at the stunning Indiana Dunes. Historically known as Steel City, Gary was still a thriving Midwestern community when Viramontes was a child. “Most of my family members worked at the Inland Steel Mill,” she said. “My mother was the ‘right-hand man’ for the first Black mayor of Gary, Richard Hatcher.”

Unfortunately, her mother died when Viramontes was just 8 years old. “I was sent to live with my old-fashioned Mexican immigrant grandparents,” she said. “It was an interesting change in my life because my mother could be categorized as a Feminist, and my grandparents were definitely not of the same worldview.”

Everyone in her family is of Mexican heritage. However, Viramontes remembers her grandparents trying to convince her that she was not an authentic Mexican girl. “I grew up believing that I was white,” she said. “Brown on the outside, but white on the inside – like that was possible. I was very confused and I deeply misunderstood my race, class, and ethnic identity.”

That confusion was one reason Viramontes chose not go to college until she was 22 – she didn’t believe she was smart enough to succeed.

“Once I started college, I never left,” Viramontes said. “When I began my master’s program, one of my professors asked about my Mexican experience in Northwest Indiana and it became clear to her how confused I was.

“Ever since that conversation, I studied my lived-experience with Mexican identity.”

College, Viramontes says, saved her life. She has been a type 1 diabetic since she was 5 and needed a career with insurance. “That motivated me to go to college,” she said. “Things turned out pretty well!”

Viramontes was a lecturer at Bowling Green State University in 2007 when she saw an ad for a position at UW-Parkside. “I felt like the description was made for me,” she said.

Viramontes was drawn to a school similar to the one she attended with working-class, first-generation students. “I had a very strong feeling that it was THE job for me,” she said, “and I was right!”

A strength of the UW-Parkside Communication Department, Viramontes says, are faculty engaged in effective teaching and curricular design. “We have consistently hired people who commit to creating courses where all students have equal access to learning,” she said. “When we provide community-based learning courses, it invites all students to contribute their strengths. Experiential learning changes the power dynamic in the classroom so that we are all co-creators working toward an amazing educational experience.”

Every academic department chair has a vision. When Viramontes became Communication Department Chair in July 2021, she said her vision was to, “not screw up anything Theresa Castor (her predecessor) had accomplished. I just want to do the same kind of honest, productive work that she did.”

Viramontes initially served as both department chair and graduate program director. “My hope is that we can grow our department faculty lines,” she said, “establish graduate and teaching assistantships, and make this department self-sufficient.”

But that’s not all: Her dream vision is to someday build and establish a Ph.D. program and put the Communication Department on the kind of map where graduate students want to come and study with UW-Parkside faculty.

Every dream has to start somewhere, and Viramontes does know a thing or two about dreams. 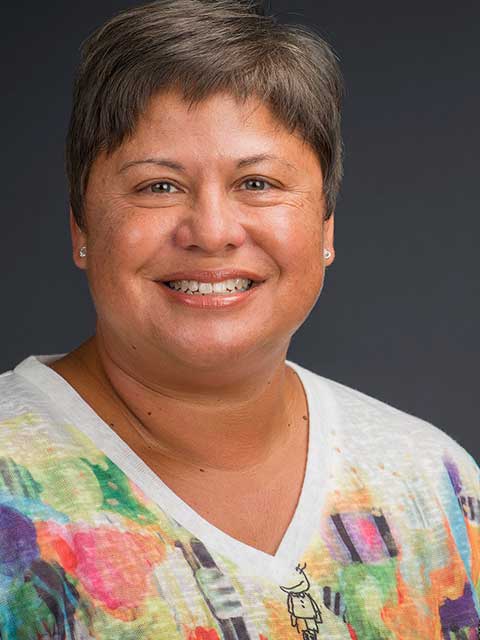 "We have consistently hired people who commit to creating courses where all students have equal access to learning.

When we provide community-based learning courses, it invites all students to contribute their strengths. Experiential learning changes the power dynamic in the classroom so that we are all co-creators working toward an amazing educational experience."

Viramontes on student success through effective teaching and curricular design