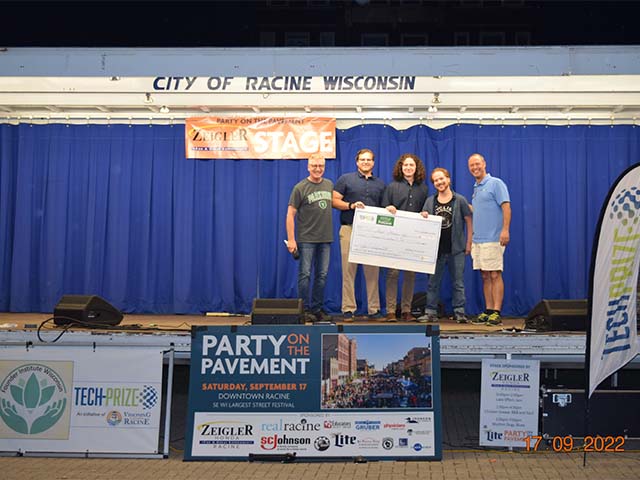 The team was recognized for their development of the “Attendance App,” which they created to help track attendance with greater accuracy. The app presents instructors with different methods of tracking attendance. Those methods are QR and Bluetooth. For QR, a student can scan a QR code to log themselves into class. For the Bluetooth option, the professor would need a Bluetooth beacon registered to the app where the students’ mobile devices would “ping” to detect that they are in class.

With more development, the team believes the Bluetooth component can provide more accurate data including what times students arrived to and left a class. The app could also provide students with their attendance record and attendance score to boost motivation to attend and allow them to evaluate their schedule and time management.

According to the team, the app was first created in an attempt to solve poor attendance in the software engineering class that they were all in together. They also credit a number of computer science courses with preparing them for this competition as well as their involvement in the App Factory, which gave them development and leadership experience.

Zoltan Nahoczki, Senior Software Engineer for UW-Parkside’s App Factory, explains what the competition means for him and how it has inspired him to aim high and challenge himself. “With a talented team and great leadership, an over-the-top innovative idea can become a reality. I hope that this app can be used to pioneer automation in a classroom setting, spending less time with attendance and more time learning. Winning this competition was more than a reward, it proves that this idea has interest and can become viable,” Nahoczki states.

All three members of the team intend to use their skills and experience from their time at UW-Parkside to launch careers in software engineering. Nahoczki and Mitchell are from the Kenosha area, while

Fallon is from Waukegan, IL.

This year’s iteration of the Tech-Prize App Development Competition placed a specific focus on Smart-City applications. The competition is an open-ended app development competition with the objective of promoting and rewarding IT development Skills and Creativity while finding solutions for relevant and timely social and infrastructure challenges in our community.

The Tech-Prize competition is an acknowledgment of the City of Racine’s 1960’s moniker of “Invention City”. According to Tech-Prize, on a per-capita basis more patents were created than anywhere else in the nation. Tech-Prize strives to replicate that energy and creativity to revive that recognition.