Become part of a leading team.

UW-Parkside students have the opportunity to participate in the Army Reserve Officers Training Corps (AROTC) through Marquette University. UW-Parkside Army ROTC cadets come with a wide array of majors and skills. In very few places in the world, and even fewer organizations in college, are individuals able to develop and test their ability to lead.

With physical training, field exercises and weekend-long events, you will develop physically and mentally and leave college as an Officer in the United States Army. This title is not given, but earned, and highly sought after by businesses and organizations around the world.

Army ROTC teaches you how to lead.

Army ROTC is a program of study that combines electives in military science with practical leadership development opportunities to prepare full-time UW-Parkside students to become Army officers. It is one of the best leadership courses in the country and can be part of any degree curriculum. We coach, teach, and mentor students through physical training, military science classes and leadership labs. ROTC opens the doors to a variety of exciting careers, extracurricular activities and advanced military training.

Students will take leadership, management and other military-oriented courses that may qualify them to accept a commission as an officer in the U.S. Army, Army Reserve, or National Guard upon graduation. The program provides a general knowledge of the contemporary role of the Army in support of national objectives and affords a practicum in leadership and management skills.

What does ROTC entail?

Students are invited to UW-Parkside to learn more about Army ROTC, engage with current cadets, watch (and potentially participate) in some of our training operations, including our once a year UH-60 Army Blackhawk helicopter dismount training.

Freshman and sophomore years, students enrolled in the ROTC basic course have no contractual obligation to the program or the Army.

To qualify for entry into the Advanced Course, students must either successfully complete the Basic Course and the Army ROTC Basic Camp at Fort Knox, Kentucky, or receive constructive credit for the basic course or prior enlistment status, or have high school ROTC experience.

Cadets have many opportunities to socialize and connect outside of the classroom. Some activities include:

Junior and senior years. ROTC classes count toward a student’s GPA, and credits earned in military science courses may apply toward graduation requirements.

Successful completion of the ROTC Advanced Course leads to a commission as a second lieutenant upon graduation in the Regular Army, Army Reserve, or National Guard. In addition to fulfilling program requirements, Advanced Course students attend Advanced Camp for four weeks at Fort Knox, Kentucky, during the summer between the junior and senior years.

Veterans and students with high school ROTC experience may be given constructive credit for the ROTC basic course, as determined on an individual basis by the professor of military science, enabling them to enter the Advanced Course at the beginning of the junior year.

National high school scholarships are available for high school seniors and those who have not completed any college.

Campus-Based (must be a current Cadet)

Minuteman – must enlist in Army National Guard or Army Reserve

CPT Hyeon S. Kim is a Korean American and enlisted in the Army on 13 June 2007. She spent two years as an enlisted Soldier and deployed to Iraq in order to support Operation Iraqi Freedom (OIF) 2008. Her enlisted assignment included HHC, STB, 1st Armored Division at Weisbaden, Germany. After her first deployment, she was selected to the Green to Gold Active Duty Army ROTC program. CPT Kim is a distinguished military graduate from Weber State University of Utah and commissioned as a Military Intelligence Officer detailed to Chemical through the Army ROTC program in April 2011.

CPT Kim’s key assignments include ACE Platoon leader and Executive Officer at the Military Intelligence Company, 2CR in Vilsek, Germany from 2011 until she left for Military Intelligence Captain Career Course (MICCC) in Fort Huachuca, Arizona in 2014. Upon graduation of MICCC, she was assigned as S2 to Blackhawk Aviation Battalion, 2ID in Republic of Korea for 22 months. She served as a Deputy G2 Plan Officer in 8th Army. Her current assignment is an assistant professor of military science at University Wisconsin-Parkside for the Golden Eagle Battalion Army ROTC. 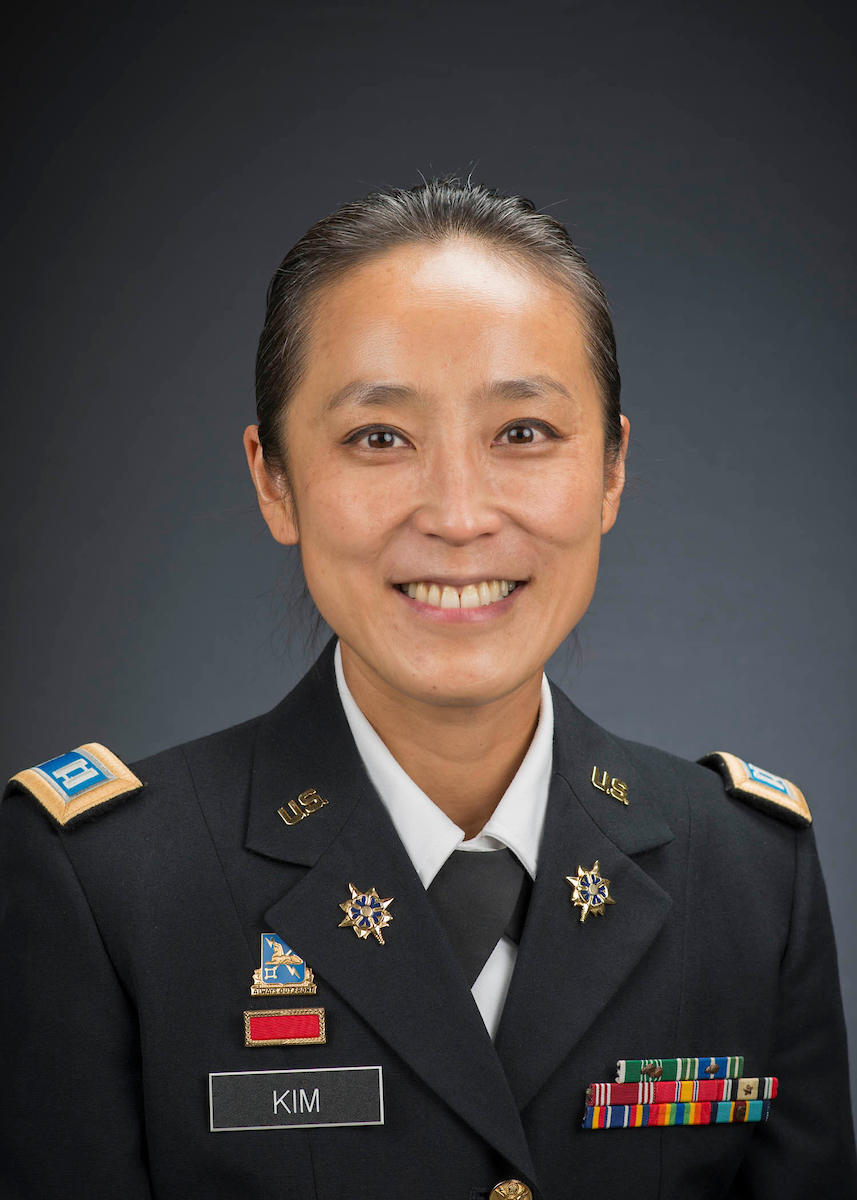