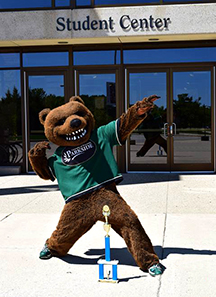 Ranger Bear was a big winner at UCA/UDA Mascot Camp in Wisconsin Dells, August 4-7th. He received the 2016 Superior College Spirit Award! Give him a high-five when you see him next time.

University of Wisconsin-Parkside mascot Ranger D. Bear captured third place during the Universal Cheerleaders Association (UCA) Mascot National Championship held Friday, Jan. 14, at Disney World in Orlando. Competing in the Open Mascot division, Ranger Bear narrowly trailed “YoUDee,” the University of Delaware mascot, and “SouthPaw” from the University of South Alabama in the final results. He placed ahead of University of Montana standard bearer “Monte” and ahead of “Big Blue” from Old Dominion University. Ranger Bear reached the competition on the strength of a terrific two-minute video which placed him in the top five out of the 18 schools in the Open Mascot Division. See his video here.