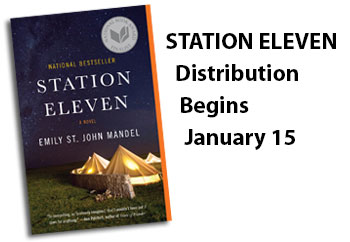 Station Eleven, Emily St. John Mandel's fourth novel, won the Arthur C. Clarke Award, was a finalist for the National Book Award and PEN/Faulkner Award, was an Amazon Best Book of the Month, and was named one of the best books of the year by more than a dozen publications. It's been translated into 27 languages. "Equal parts page-turner and poem" (Entertainment Weekly), the novel is set 20 years after a devastating flu pandemic destroys civilization as we know it. A woman moves between the settlements of the altered world with a small troupe of actors and musicians until they encounter a violent prophet who threatens the tiny band's existence. "Possibly the most captivating and thought-provoking post-apocalyptic novel you will ever read" (The Independent London). "Think of Cormac McCarthy seesawing with Joan Didion ... Magnetic" (Kirkus starred). "It's hard to imagine a novel more perfectly suited, in both form and content, to this literary moment" (The New Yorker). "I kept putting the book down, looking around me, and thinking, 'Everything is a miracle'" (National Public Radio).

A Look at The Big Read So Far