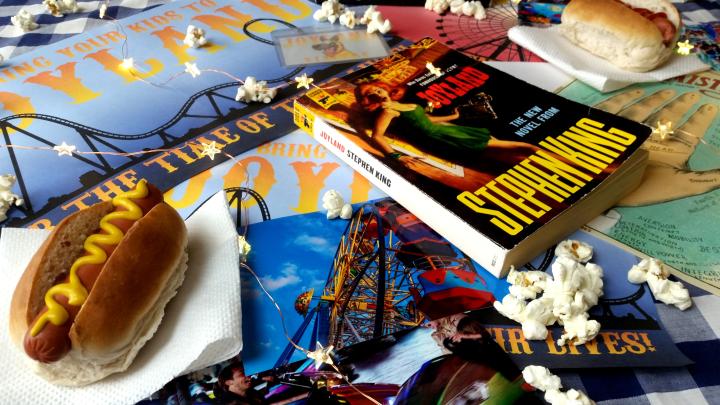 This year's book is Joyland by Stephen King. Free copies of the novel will be available starting in mid-January. Parkside and our community partners will be hosting a wide variety of events including book discussions, beer tastings, trivia nights, and films.

"As with King’s first release with Hard Case Crime (The Colorado Kid, 2005), this is an uncharacteristically svelte offering that feels born of a weekend whim but is nevertheless possessed with an undeniable offhand charm. In the summer of 1973, 21-year-old Devin stumbles into a job at a North Carolina amusement park called Joyland, where he operates rides, mops up vomit, and “wears the fur” (dressing up as park mascot Howie the Happy Hound to amuse the kiddies). Bittersweet interjections from an older Devin lend the story an aching nostalgia, and between the chummy carny-chatter (terms like gazoonies, fump, and donniker fly fast and furious) and meaningful first times (losing his virginity, a crushing breakup, etc.), a fantastical mystery gradually emerges. Devin befriends a dying 10-year-old whose psychic hunches help hunt down the murderer of the ghost girl who haunts the park’s Horror House. Until the ghoulish climax, this reads like a heartfelt memoir and might be King’s gentlest book, a canny channeling of the inner peace one can find within outer tumult. HIGH-DEMAND BACKSTORY: Small-press, paperback-only, yes, but King is still King." – Daniel Kraus Booklist

"An amusement park and murder figure into a coming-of-age tale in this miniature thriller with a hint of the supernatural." – Los Angeles Times

"Wrapped in a gloriously pulpy cover, Joyland is a coming-of-age story set in 1973 at a North Carolina amusement park -- creepy! -- that's haunted by a murderer." – Time Magazine