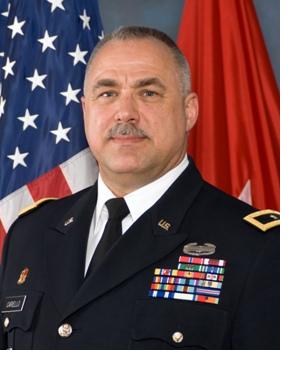 Traditions of Excellence - Dominic A. Cariello

Dominic spent more than 30 years as an officer in various assignments and command within the 57th Field Artillery Brigade. He was deployed as the Task Force Wisconsin commander for Hurricane Katrina relief; then selected as the commander of the Task Force Wisconsin Forward 23 Embedded Training Team that was deployed to Afghanistan from December 2005 to March 2007 to train, mentor, and conduct combative operations with the Afghan National Army and police.

In his civilian occupation he is general manager of Badger Meter, Racine, Wis., and Tulsa, Okla., operations. He is on the Board of Directors of RAMAC and the Racine United Way. Dominic holds a bachelor's degree in mechanical engineering from the University of Wisconsin-Parkside and a master of strategic studies degree from the United States Army War College.

He is married to Rosemary (Garrity), and the couple has two children: Kayla, a registered nurse at Aurora Health Care, and a son, Matthew, who recently graduated from UW-Parkside and is employed at CB Richard Ellis (CBRE) as a broker.