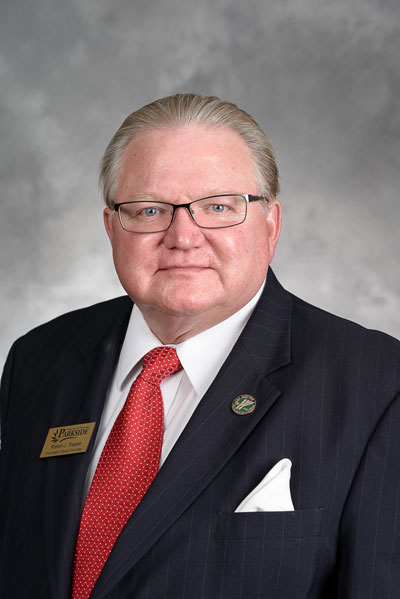 Robert Toeppe attended UW-Parkside from 1969-1973 and graduated with a B.S. in business management. He was a two-year letter winner on the men's golf team under Coach Steve Stevens and co-founded the first fraternity on campus, Alpha Kappa Lambda, becoming a colony in 1970.

While enrolled at the university, Robert worked fulltime at Wisconsin Plating Works, his family's metal-finishing business. In July 1974, he became president of the company and served in that role until retiring in 2013. Robert has been involved with civic and business organizations including The Benevolent and Protective Order of Elks, BPOE Lodge #252 and served as Exalted Ruler from 1977-1978. He has also served as program chairman of the Society of Manufacturing Engineers, membership chairman of the Sales and Marketing Executives and received the Membership Growth Achievement Award. Robert became president of the State Street Business Area Association in 1978 and received the Man of the Year Award in 1986 while serving as the director of the Chicago Metal Finishers Institute.

In the early 2000s, Robert became actively engaged at UW-Parkside. He is a member of the College of Business, Economics, and Computing Advisory Board, and a trustee on the Foundation Board. In the past eight years he has funded the Robert J. Toeppe Business Scholarship for CBEC undergraduates. In 2007, Robert was awarded an honorary membership in UW-Parkside's business fraternity, Beta Gamma Sigma, and in 2008 received the Business Person of the Year Award from the Racine Area Manufacturers and Commerce (RAMAC).

Robert married his college sweetheart and has two grown daughters and six grandchildren. He remains active in the community and supports the Stars and Stripes Honor Flight, is on the selection committee of the Racine County Sports Hall of Fame, and is a treasurer and board member of the Kassel Mission Historical Society.