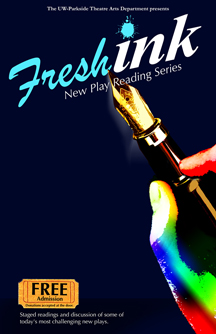 The final show in this year's FreshInk Series, How the World Began, opens this Friday!

The FreshInk Series is a way for students to get involved in theatre and perform important new plays. They are performed as a staged reading which means that the actors have their scripts in front of them. All FreshInk productions are free and everyone is invited to join the cast and director afterwards for a talk about the show.

How the World Began, by Catherine Trieschmann, is a powerful story about a science teacher from Manhattan who arrives in rural Kansas after a tornado has ripped the town apart. Susan finds herself thrown into an ethical firestorm making a comment about how life on earth began. The compassionate and honest play focuses on the tension between creationism and evolution, and how this is taught in schools. It is also a powerful psychological investigation into individual responses to these issues and the ways in which people are driven to extreme ideological positions in times of stress.

Show times are Feb 20 and 21 at 7:30 and Feb 22 at 2. All performances take place in Studio A of the Rita Tallent Picken Regional Center for the Arts and Humanities.