Voices of Parkside Travels to India

Published: November 19, 2015
By: Kristin Crowe
In late September, UW-Parkside Music Professor and Director of Choral Activities Dr. James Kinchen took 10 students, and four alumni to the "International Seminar of Science and Music" hosted by Mahatma Gandhi University in India. Kinchen was invited to be the keynote speaker and the students, who make up the university's Voices of Parkside chorale group, were invited to perform during a concert and as part of Kinchen's presentations.

Kinchen spoke very highly of the trip and of the Parkside students who accompanied him, and was very impressed by their concert performance. Brianna Santelli of Kenosha, Christina Jones of Milwaukee, and David Zapp of Kenosha, three members of Voices of Parkside, didn't know quite what to expect before they boarded the plane to India. When the idea of the trip was first announced, Santelli and Jones said they jumped at the chance to go; Zapp was a bit hesitant. But other members of Voices of Parkside, including Santelli and Jones, encouraged Zapp not miss out on the opportunity.

"Nerve wracking," "stressful," and "exciting" were words the trio of students used to describe their emotions while preparing for the journey. The trip itself? A learning and bonding experience to be sure. They noted how different the culture and environment of India is compared to that of the U.S., and how adapting to those cultural and environmental changes brought the group closer together.

One of the differences was immediately evident when they stepped off the plane and were greeted by 100-degree heat combined with, according to the students, "120-percent humidity. "We think we know hot here in the U.S., but we do not," Zapp said. Jones called the heat "a bonding experience in itself. We were all pretty close already, but you get close on a different level when you are all together in that kind of heat and you are extremely sweaty and gross."

For some members of Voices of Parkside, it was their first taste of international travel. And the trip was not without a few stressful moments. Nervous to be in such a new place without her family, Santelli found it challenging when she first arrived and could not speak to her mom. Jones had her moment on the final day of the trip when she discovered that the toilet in the new place they were staying was in the shower and there was a giant spider in the sink. The "moments," Santelli and Jones said, made the group stronger and brought them even closer together. According to the girls, Kinchen was the only one to keep it together throughout the entire experience. "I could not afford to have 'a moment,'" said Kinchen.

Throughout the trip, the group would visit different churches and other tourist attractions, they even went on a tour of the "backwaters" of Kerala. Each new place they visited seemed to surprise them more than the one before. One of the biggest culture shocks for all the students seemed to be the food. "In America, you can have any food you want, whenever you want it. In India, you basically have rice and curry for every meal," said Zapp. Santelli mentioned that the food is unlike anything we know here, even compared to the Indian restaurants in the U.S. Jones recalled arriving in Dubai and her joining the rest of the group in a quick sprint for the airport McDonalds that they were all overjoyed to see. Each of the students mentioned how privileged we seem to be here in the United States. This experience was definitely eye-opening.

Throughout the ups and downs, Jones and Zapp agreed that the concert performance was the highlight. "It was hot, and we were wearing tuxedos. I did not want to perform. However, as soon as we got on stage and saw the crowd, there was nowhere else that I would have rather been," Zapp said. "Something came over us to make that performance our best show," Jones said, "at the end all I could think was 'I just performed in India!'"

In the months leading up to the trip, Voices of Parkside met three times over the summer for extended rehearsals. Santelli said that it was very important to practice the music on their own, because three times never would have been enough. They performed those pieces at concerts here in the U.S. as sort of a trial run before going to India, but according to Santelli, they were not comparable. "Performances here in the U.S. did not even prepare us for what we felt while performing there," she said. "It was a totally different atmosphere. We were treated like celebrities."

After their performance, people were hugging the Parkside students and taking pictures with them. Jones recalls one lady calling their show, "a gift from God."

The experience was certainly very different from anything that these Parkside students had ever experienced. When asked if they would do it again –a resounding "yes." "I think we laid a solid foundation for future interactions, even collaborations, and maybe even formal connections with Mahatma Gandhi University," Kinchen said. "I met with some of the officials and they are very excited about future prospects." Some of those prospects include possible student and faculty exchange programs between UW-Parkside and Mahatma Gandhi University. 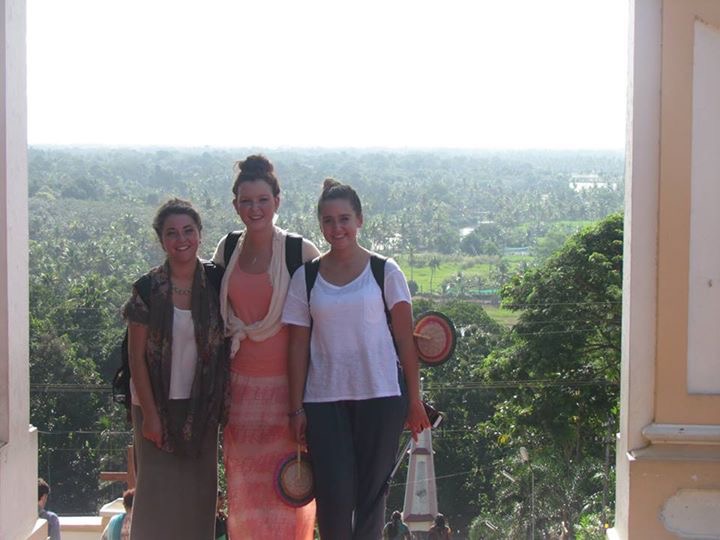 (Voices of Parkside's Christina Jones, Rylie Armantrout, and Brianna Santelli pose for a photo while in India.)