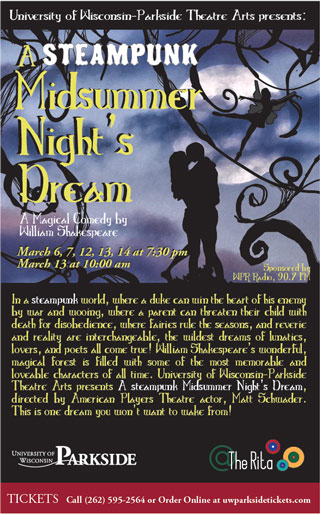 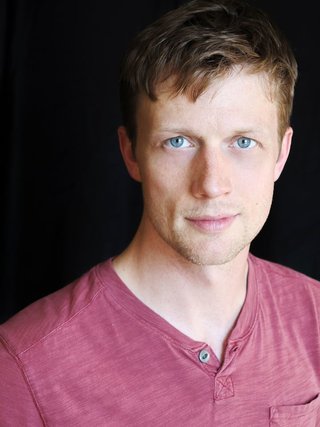 Listen to interview of Matt and cast members

Ryan and Carena on WGTD (March 3)

In honor of the theatre department’s exciting Steampunk production of A Midsummer Night’s Dream opening next week, here is an insightful interview with professional actor and the show’s director Matt Schwader! --View Trailer--

Q. What is Steampunk?

A. Steampunk is an artistic movement born out of a subgenre of science fiction and fantasy that included a deconstruction, or reimagining, of social and technological aspects of the 19th century, often with elements of advanced machinery and the supernatural. Today, it's not just limited to literature, but has moved into nearly all other art forms - music, fashion, film, television, games, visual and performance art. Basically it takes the whimsy of actual technological innovations from the late 1800s (air ships, bicycles, steam locomotion, etc.) and marries them with sci-fi/fantasy (mechanical men, magic, illusion, etc.)

Q. What inspired you to choose Steampunk as your concept?

A. Well, for me, the idea of setting the show in an actual historic past would be just as arbitrary as placing it in a fictional one. I say that because no matter how much we research or attempt to accurately replicate any given period of time outside of the present, we inevitably use our imagination to best support the specific story at hand, as well as to make up for the gaps in our knowledge of whichever historical time and place we have chosen. No matter what, we'd be generating makeshift bridges between that historical period and the time in which we all live now anyway. For Midsummer, we need a world in which a duke can win the heart of his enemy by war and wooing, a world where a parent can threaten their child with death for disobedience, where fairies rule the seasons, and reverie and reality are interchangeable. We need a world where our wildest dreams can come true. What better way to explore these fantastical ideas with our modern minds than in the whimsical universe of Steampunk?

Q. What has been your favorite part of this process?

A. Honestly, I've loved every minute of it. The theatre artists at UWP are creative and daring. Everyone seems so brave and willing to jump in head first, even when it's scary. I've loved working hard on the language with actors who are new to Shakespeare and discovering all that the text has to offer us. I've been thrilled at what all the designers and artisans have been coming up with to create this universe in which we are setting the play. It's been a real creative exploration from start to finish.

Q. How long have you been a professional actor with the American Players Theatre?

A. I've been acting professionally in and around the greater Chicago area for about 18 years. I was with American Players as an actor from about 2007 – 2014. This year I am moving into a different role there. I will be coaching the apprentices on their Shakespeare work. I've found a love for teaching and coaching this stuff, so I'm exploring that now more than the 'on stage" stuff. We'll see where that goes!

Q. What is your favorite thing about teaching and directing at Parkside?

A. The People! The students and my fellow faculty and staff are just incredible. Like I said before, this is an extraordinary group of individuals. They are all working their butts off with homework, class time, projects, jobs, and rehearsals. Yet, everyone seems to want to bring their "A" game to every task at hand. It's really inspiring. I've got a deep, deep respect for everyone here. I'm constantly in awe.

Q. What should audience members expect from this show?

A. FUN! It's all about love and magic and passion and laughter. The set is stunning, the lights are amazing, the music is super cool, the costumes are mind-blowing, the acting is top-notch… the audience is going to have fun!

Q. What advice would you give someone who wants to go into theatre professionally?

A. The same advice I'd give to any young professional: it is entirely on you to make it happen. The world is what you make of it. Don't waste time sitting on your hands, waiting for someone to open the doors for you or negatively comparing yourself to anyone else. Focus on what it is you really care about, what you love, what you really want to do and just do it. Stay positive, put love into the world, and work hard for what you want. It's the only way to know what is right for you in the end.

If you would like to know more info about this show, click here!
If this has inspired you to see the show, buy your tickets here!
Scroll to top
Who Are You?