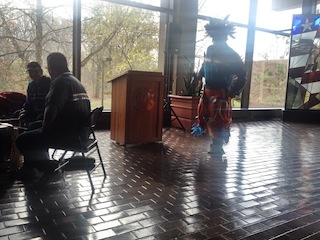 On Monday, Parkside kicked off the Native American Heritage Month events with a visit from the Night Eagle Singers, a group comprised of different Native American tribes ranging from Wisconsin to North Dakota. Students were introduced to different types of songs, such as the flag song, which is comparable to us singing the National Anthem, as well as travelling songs. Dances were also introduced, with the men's traditional dance and a few social dances that students were urged to take part in. These two aspects together make up an event called a "Pow Wow."

Students who had the pleasure of attending this event from 12 pm to 1 pm had the ability to broaden their knowledge of the Native American culture and people, learning about the traditional dress – which is not a costume, and is similar to the way in which we dress up in a suit and tie for a special event, as well as learning about the significance of music to the Native American people.

The drum that the members hit while performing songs and dances is symbolic of the Earth, and hitting it is considered giving the Earth a heartbeat. According to folklore, a war was ended between the Dakota tribes and Wisconsin tribes when the Dakota tribe gifted one of these special drums.

The event ended with a travelling song, which lyrics translated to "have a great time, if the old people don't see you smiling and laughing, they will leave broken hearted." The Night Eagle Singers left an impression on the students of Parkside, and taught us lessons we won't soon forget about our Native American friends!

Additional events are scheduled for the Native American Heritage Month, next up are a native art presentation on November 10 at 6 pm in The Rita room 117 and an educational talk about Native American culture with Heather Kind-Keppel on November 12at noon in Molinaro D137, so don't miss out on taking part in our real amazing events here at Parkside!
Scroll to top
Who Are You?