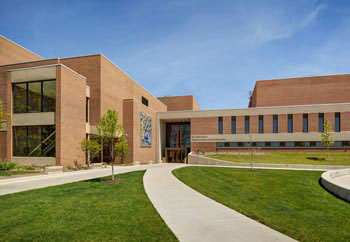 At UW-Parkside, faculty members research and publish in their fields of interest in addition to their teaching. Their continuous scholarly work is part of what makes the university’s learning environment “real” and “amazing.” A faculty member who’s still working in his/her field is still a learner and a discoverer, still engaged in the active pursuit and production of knowledge. Often, this makes all the difference in what that instructor is able to bring to the classroom. UW-Parkside’s English department has gone through a lot of changes in recent years, as distinguished scholars like Don Kummings, a noted authority on Walt Whitman, have retired. Upholding that teacher-scholar tradition, English’s newest faculty members, Tara Pedersen and Josef Benson, are both authors of new scholarly books in their respective fields. English department chair Jay McRoy is enthusiastic about his department: "I am proud to say that this Department’s faculty continues to shine: Our instructors rank among the highest in the university, and set terrific examples for our students."

Benson’s book, Hypermasculinities in the Contemporary Novel: Cormac McCarthy, Toni Morrison, and James Baldwin, was published in July and is available from Amazon and other retailers. According to the book’s publisher, Rowman and Littlefield, “Benson argues that exaggerated masculinities originated on the American frontier and transformed into a definition of ideal masculinity embraced by many southern rural American men. Defined by violence, racism, sexism, and homophobia, these men concocted or perpetuated myths about black men to justify their mistreatment and mass murder after Reconstruction. Many black men embraced the myth of the black rapist, as well as the baser patriarchal aspects of white male southern power. As Benson illustrates, the protagonists in these texts heroically fail to perpetuate hypermasculinities, and as a result a sense of ironic heroism emerges from the narratives. Offering a unique and bold argument that connects the masculinities of cowboys and frontier figures with black males, Hypermasculinities in the Contemporary Novel suggests alternative possibilities for American men going forward. Scholars and students of American literature and culture, African American literature and culture, and queer and gender theory will find this book illuminating, frightening, and persuasive.”

Tara Pedersen’s Mermaids and the Production of Knowledge in Early Modern England also investigates gender and sexuality, but by looking at the ubiquitous figure of the mermaid in 16th and 17th century English literature and culture. As Pedersen’s publisher Ashgate Publishing explains, “We no longer ascribe the term ‘mermaid’ to those we deem sexually or economically threatening; we do not ubiquitously use the mermaid’s image in political propaganda or feature her within our houses of worship; perhaps most notably, we do not entertain the possibility of the mermaid’s existence. This, author Tara Pedersen argues, makes it difficult for contemporary scholars to consider the mermaid as a figure who wields much social significance. During the early modern period, however, this was not the case, and Pedersen illustrates the complicated category distinctions that the mermaid inhabits and challenges in 16th-and 17th-century England. Addressing epistemological questions about embodiment and perception, this study furthers research about early modern theatrical culture by focusing on under-theorized and seldom acknowledged representations of mermaids in English locations and texts. While individuals in early modern England were under pressure to conform to seemingly monolithic ideals about the natural order, there were also significant challenges to this order. Pedersen uses the figure of the mermaid to rethink some of these challenges, for the mermaid often appears in surprising places; she is situated at the nexus of historically specific debates about gender, sexuality, religion, the marketplace, the new science, and the culture of curiosity and travel. Although these topics of inquiry are not new, Pedersen argues that the mermaid provides a new lens through which to look at these subjects and also helps scholars think about the present moment, methodologies of reading, and many category distinctions that are important to contemporary scholarly debates.” Pedersen’s book is already listed on Ashgate’s website and will be available in January, 2015.

At UW-Parkside, Pedersen teaches Shakespeare and British literature, and has taught at least one course on literature and science. Benson, who joined the UW-Parkside English department only last year, teaches modern and contemporary American literature and creative writing. Both faculty members also teach introductory level courses like freshman composition and Introduction to Literature in addition to upper level courses for English majors and minors, and both believe strongly that their research and writing impacts their teaching at all levels. In the words of Tara Pedersen,“I tell my students each semester, it is a privilege to learn with them because that's precisely what I do. I may be an expert in my field, but when I bring new research questions and materials into the classroom space, I am refining ideas and approaching topics with the same intellectual curiosity, openness, and rigor that I encourage in my students.”

English English, Film and Cultural Studies
Scroll to top
Who Are You?