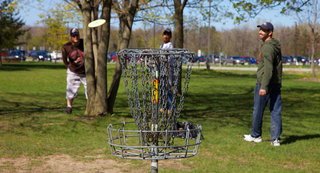 The Prairie Open is a huge disc golf tournament that is being held right here at Parkside on April 18th and 19th!

This is the 13th year that The Prairie Open Tournament will be held at Parkside and we think that's Real.Amazing! This event is one of 15 on the Wisconsin Disc Golf Tour and players are coming from all over Wisconsin, Michigan, Illinois, and Iowa to compete. Players range in age from 15 to 70 and compete in divisions such as Junior, Recreational, Intermediate, Advanced, and Pro.

The maximum number of competitors is 210, with half competing on the first day and the other half on the second day. This year, the spots were filled so quickly that there have been people on the wait list since February. The Pro and Advanced divisions will be competing on Saturday the 18th and the remaining divisions will compete the following day.

This year, Parkside is proud to recognize two students that will be competing as well as a future Ranger! The President of the Parkside Disc Golf Club Alex Roszkowski and Vice-President Nathan Van Ee will be representing us along with Justin Van Ee, who will be attending Parkside in the fall. We are also lucky to have the designer of Parkside's disc golf course and Professional Disc Golf Association Hall of Fame member Don Hoffman competing. The whole event is also organized and run by Parkside Admissions Counselor Sergio Correa.

This event is open to the public and the media so it's a great opportunity for us all to get some fresh air and support our fellow Rangers. Check in will begin at 7:30am and play will start around 9, so bring some friends and walk the trails with us!