Russ Johnson's Out To Lunch: The Music of Eric Dolphy performing "Love Suite" 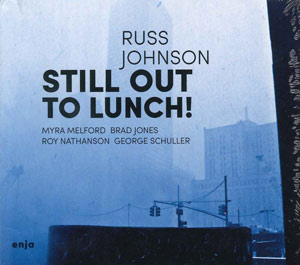 Still Out to Lunch

"Out to Lunch" is led by trumpeter, composer, and educator Russ Johnson. Johnson teaches at the University of Wisconsin-Parkside and the Maine Jazz Camp.

Both events are free and open to the public.

Already very well known after playing for twenty years in New York and in Europe before moving to this area, popular UWP jazz instructor Russ Johnson has enjoyed marked success on the Chicago jazz scene. Peter Margasak, a journalist for the Chicago Reader, stated in 2012 that Johnson was an up and coming star because "the dude can play some serious trumpet." More recently, Margasak again celebrated Johnson, saying that "the Chicago jazz scene has benefited hugely from his proximity."

According to the Jazz Festival's website, "Capitalizing on the unusual contrast between its two horns, the band thrives on stretches of bold, built-in intensity as well as spare, relaxed interactions. Johnson comes from the same school as Dave Douglas with his hard-edged but fluent sound, but follows his own path with his compressed power and striking use of a mute.

In Johnson and Stein, the quartet boasts two players who make you hear the music in a new way with much of what they do." Johnson's recent album Meeting Point, which was released in May, has helped to further popularize his music and won rave reviews from the jazz world's Bible, Down Beat magazine, as "an album to savor," because Johnson's collaborators Anton Hatwich (bass) and Tim Daisy(drums) "engage with Johnson's personal compositional approach, which emphasizes bold and catchy melodies, without abandoning their commitment to playing in more abstract zones." Bill Meyer, the author of the review, also admired the interplay between the "steely sturdiness" of Johnson's own trumpet playing and saxophonist Jason Stein's "coal-dark smolder of ambiguous activity under Johnson's bright, fluttering phrases." Meeting Point's record label, Chicago-based Relay Recordings, maintains that the album "strikes a unique and engaging balance between thematic material and extended improvisation, creating an exciting book of original music which exploits the strengths of the individual musicians while at the same time maintaining a cohesive group sound." Meeting Point is available on iTunes, for download directly from the label, and now on CD.

And, as if Meeting Point was not enough, Johnson is scheduled for a CD release concert on October 19 at 3:30 p.m. in Bedford Concert Hall and a master class the following day on October 20 to celebrate his new album Still Out to Lunch, which will be released by Enja Records later this month. This album is inspired by Eric Dolphy's jazz classic Out to Lunch, which Johnson describes as "Dolphy's recorded masterpiece, a work of brilliant complexity that pulls the listener into its ceaseless flow, famously described as 'too out to be in, too in to be out.' Fundamental to the foundation of free jazz, Dolphy was hailed by Charles Mingus as the most perceptive interpreter of his music, and Coltrane considered him his only musical equal." This new album, which also features Roy Nathanson, Myra Melford, Brad Jones, and George Schuller, offers a fresh examination into Dolphy's classic compositions.

Johnson, who has been teaching at Parkside since 2012, is a multitalented instructor and teaches the campus's popular Jazz Appreciation and Jazz History courses in addition to running the Music Department's Jazz Ensemble and giving individual trumpet lessons. UW-Parkside is certainly fortunate to have him, and Johnson is proving to be an inspiration not only for UWP's Music students, but for the entire campus.

Music
Scroll to top
Who Are You?