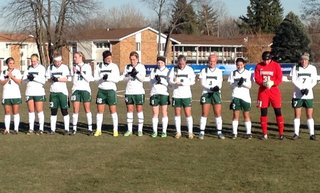 The Women's Soccer team at Parkside has always been incredible, but this year they truly went above and beyond. The NCAA Division II statistical rankings were recently posted and we are proud to celebrate that our team has succeeded yet again. The Rangers rank #1 out of 228 teams in goals against average. They also rank 3rd in shutout percentage, 6th in save percentage and winning percentage, and 9th in total assists.

There were also individual rankings given and Parkside is proud to acknowledge three of our girls who made the list. Mallory Geurts, who also received the All-American title, is ranked #1 in goals against average, 7th in save percentage, and 8th in minutes played. Niekie Pellens ranked 4th in both assists per game and total assists, and Emily Konior ranked 23rd nationally in game-winning goals.

As a team, the Rangers were the 2014 Great Lakes Valley Conference regular season and tournament champions. This was also the 4th time in program history that the team has advanced to the NCAA Sweet 16. Congratulations on an amazing season girls!
For more information click here.
Scroll to top
Who Are You?