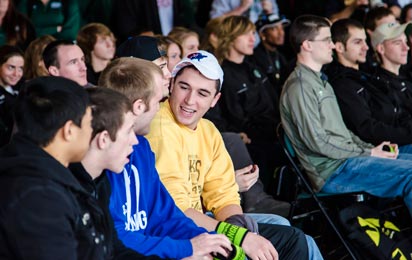 Speech 105 (Public Speaking) is one of the most popular general education courses at UW-Parkside. It's required for many majors and minors, including Business Management, Accounting, Human Resource Management, Communication, and Marketing. And of course, that makes sense, as whenever you read an article about what employers want from college graduates, the ability to speak well is always close to the top of the list. Bonnie Peterson, who directs the Speech program at Parkside, is passionate about her discipline, and in 2012, she had a brainstorm. "I wanted to create an event that would allow students to grow and the community to see the great students we have at UW Parkside," she says. "Students have a difficult time transitioning from the skills learned in the classroom to those needed in their careers. It is important for students to get experience speaking in a larger group and a different environment than the traditional classroom. It is also important for our student to see, that even if they weren't chosen to speak at this event, they have learned the same skills and 'could have and would be able to' speak at larger event." Thus, on April 26th, 2012, Public Speaking Night was born.

This semester, Public Speaking Night begins at 7:00 PM on December 2nd in the Student Cinema. Each student competing must deliver a 6 minute persuasive speech on any topic of his/her choice, speaking extemporaneously without notes or a prepared text. They must use a PowerPoint or equivalent to accompany their speeches, but they cannot have any special lighting or music or have anyone to help them on stage.

Public Speaking Night is, according to Peterson, the Ultimate Competition and is as fun for the audience as it is for the competitors. All members of the community are warmly welcomed, as Peterson feels that the bigger the audience the better the learning experience for the students. Public Speaking Night is a high-energy event. Students learn that they have learned. They gain confidence and faith in the educational process, whether they speak or not. They also learn that speaking in public is fun. Peterson says that audiences have often told her what they find so entertaining about Public Speaking Night: "Public Speaking Night is REAL. You can tell it's real. The tension is real. The excitement is real. Students don't even get to practice ahead of time in the Cinema. No one knows what the other speeches are going to be until they are given. Even I don't know what the other speeches will be. No one can tell who taught who. It is one seamless line of professional training. It takes complete trust to hold Public Speaking Night and attach my name to it. Trust in those I hire to teach public speaking. Trust in our student's ability to analyze and critically think and speak. Students trust that they have been given the skills to survive this competition. Everyone learns how truly talented our wonderful Parkside students are!!! Because it's REAL."

The competition is only open to students currently enrolled in SPCH 105, and the participants are chosen to represent their class section of the course. Each class must choose one representative, so the chosen contestants are already considered to be the best speakers in their respective classes. However, outside judges chosen by Peterson determine who wins Public Speaking Night. The judges are not Parkside faculty or staff, but respected members of the communities served by UW-Parkside. This year's judges are:

Keith Bosman is a lifelong Kenoshan. He is a graduate of Bradford High School and the University of Wisconsin-Parkside. Keith was first elected to public office in 1988 and served six terms on the City Council. He was elected Mayor of the City of Kenosha in April of 2008 and re-elected to a second term in April of 2012. Prior to becoming Mayor, Keith was a sales manager in institutional food service for 30 years. Married to wife Deborah since 1976, they most enjoy spending time with family including grandchildren Isabella and Jackson.

Thomas Boyd has been an attorney for 32 years with an emphasis on civil and criminal litigation. During his law practice he was an Associate Lecturer at the University of Wisconsin Parkside for both the Business and Criminal Justice Departments. Currently, Thomas Boyd serves as an Attorney Advisor for the Social Security Administration's Office of Hearings and Appeals. He has been a frequent judge for Regional Midwestern College Mock Trial Competitions, as well as high school mock trial competitions in Racine County.

Tyson Fettes graduated from the University of Wisconsin-Parkside in 2008 with a Bachelor of Science degree. As a student Tyson was active in many student organizations and was elected Student Body President in 2006. While still a student at UW Parkside, Tyson was elected to the Burlington Town Board. In 2011, Tyson was appointed to the position of Racine County Register of Deeds. Tyson was then elected to the position Racine County Registrar of Deeds in November of 2012. Tyson overseas all real-estate records for Racine County, as well as all vital records, birth, marriage, and death certificates. Tyson is very active in the community, serving on various boards and is an active member of the UW-Parkside Alumni Association.

Gregg Guttormsen has a Bachelor of Science degree in Political Science from Miami University. He worked for the Sergeant at Arms of the Wisconsin State Senate. He was a District Manager for a Fortune 500 company. Gregg Guttormsen then earned his law degree from Capital University Law School in Columbus, Ohio, and returned to Kenosha, where he built a thriving law practice. In 1986, Attorney Guttormsen was elected City of Kenosha Alderman, as well as, Board of Water Commissioners and the Redevelopment Authority. Recently, Attorney Guttormsen was called on by his peers to present arguments before the Wisconsin Supreme Court. Attorney Guttormsen holds a Wisconsin Insurance License. He has taught at Gateway Technical College. He serves as counsel for the City of Kenosha Board of Assessment Review. In 1994 he was elected by his peers to serve as president of the Kenosha County Bar Association. He is married, with two adult daughters.

James Ladwig, Racine County Executive, graduated from UW-Whitewater in 1993. Jim joined the Police Department of the Village of Caledonia and served for nearly 12 years, advancing quickly to the position of detective, additionally working on the Racine County Metro Drug Unit. He also managed a family business, Mulligan's Mini Golf in Caledonia. In 2004, Jim was elected as the Racine County Register of Deeds and later elected and installation as County Executive in 2011. Jim is an avid basketball fan and coach, as well as a die-hard Badger supporter. He lives in Caledonia with his wife, Deb, and their children, Savannah and James.

Maureen Montemurro has a Bachelor of Science degree in Industrial Engineering from UW-Madison and her MBA degree from UW-Parkside. Maureen started her career at Snap-on Tools, as a Supplier Quality Engineer, soon promoted to Supplier Quality Manager, then advanced to Lean Master Facilitator. She moved to Johnson Diversey as a Lean Leader and Production Manager. In 2010, she accepted a position at SC Johnson, as a Production Manager. She is currently in a Global Quality role. Ms. Montemurro has also been trained in Green Belt Six Sigma. She is a Certified Quality Engineer, through American Society for Quality and a Master Facilitator through Milwaukee School of Engineering. Maureen currently sits on the Advisory Board of UW-Parkside's Graduate Business School Alumni Association

Luann Simpson, MSW, CAPSW, CPS: is a Certified Advanced Practice Social Worker and a Certified Peer Specialist. She also holds a certificate in Family Mediation and Non-Profit Leadership. Luann is a 1985 graduate of the University of Wisconsin-Parkside and earned a master's degree at the University of Wisconsin-Milwaukee. She has been employed at the National Alliance on Mental Illness of Racine County for the past 16 years, currently holding the position of Program Director. Luann holds a citizen representative seat on the Racine County Human Services Board.  Luann received the Wisconsin Women's Health Foundations Champion in Mental Health Award in 2009 and the 2012 UW-Parkside Distinguished Alumni Service Award.

Jennie Tunkieicz, chief of staff for Kenosha County Executive Jim Kreuser, was one of the speakers at her 1987 UW-Parkside graduation ceremony. While a student at Parkside, she was a reporter and editor of Parkside's Ranger newspaper. After graduation, she became a reporter and the first and only female city editor at the Kenosha News. In 1998, Tunkieicz worked as a reporter and editor at the Milwaukee Journal Sentinel and received the 2005 Milwaukee Press Club Award for Excellence in Journalism. In June 2008, Tunkieicz left journalism to work for another UW Parkside graduate, Kenosha County Executive Jim Kreuser. Tunkieicz is vice-president of the Kenosha Achievement Center Board and co-chair of Healthy People 2020. She and her husband, John Hansen, live in Somers with their two dogs, Butch and Max.

Once again, this semester's Public Speaking Night is on December 2nd at 7:00 PM in the Student Center Cinema. Come and join us for a night of real and amazing competition!