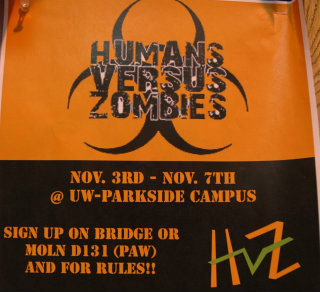 Next week, a virus will be sweeping through Parkside. Don't worry though, it's only a game.

Humans vs Zombies has been a tradition at Parkside since at least 2010. Although last year's harsh winter seemed to have eliminated the virus, Parkside's Association of Wargamers (PAW) has brought it back this year in full swing.

On Monday, Parkside's selected Patient Zero will begin infecting Human players (marked with bright arm bands), turning them into Zombies (marked with bands around their necks). As a means of defense, Human players can use marshmallows and bundled up socks to temporarily stun Zombie hoards. Every night at 6pm, the Human and Zombie teams have an assigned mission that, once completed, will grant bonuses for their team and affect gameplay for the rest of the week.

Those interested in playing can still sign up until Monday. Stop by the PAW room (MOLN D131) to receive full rules and information.

For those looking to prepare themselves for the upcoming cold and flu season, stop by the Student Health and Counseling Center.
Scroll to top
Who Are You?