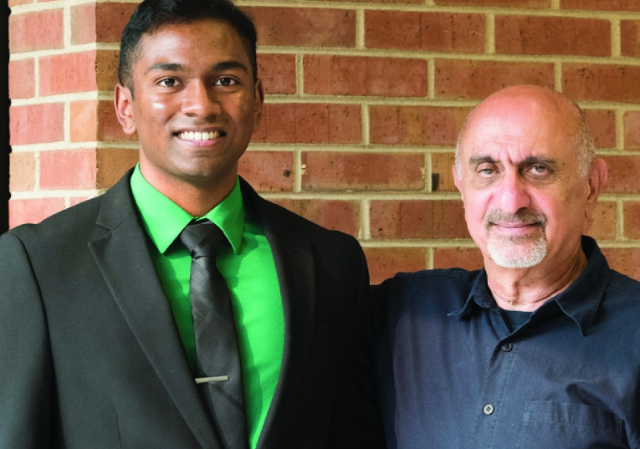 UW-Parkside physics major Siva Shankar was voted the best undergraduate presenter at the April meeting of American Physical Society (APS) held at Ohio State University in Columbus, Ohio. Shankar’s presentation -- “Damping of a Simple Pendulum Due to drag on its string” -- was selected from the 90 given by undergraduate students from all over United States including students from MIT, UW - Madison, Caltech, UCLA, Ohio State University, and many other reputable institutions of higher learning.

Shankar says he is humbled by the honor. “With more than 50,000 members, the American Physical Society is one of the largest organization of physicists in the scientific community,” Shankar said. “Being recognized as the top undergraduate presenter was amazing. I was humbled beyond belief that out the 100 different oral and poster presentations that took place, mine was singled out as the best.”

Shankar’s research involves a pendulum, consisting of a small bob and a massless string. Although a pendulum will theoretically oscillate indefinitely in a vacuum with zero air resistance. A pendulum on Earth, due to the Earth’s atmosphere, will slowly lose energy and speed, causing it to slow down and stop.

“The common conception is that the bob of the pendulum, being much larger than the string, has more air resistance and contributes the most to the total damping of the pendulum, and that the string may be negligible,” Shankar said. “This is the conception my research advisor Dr. Mohazzabi and I tested, and found to be false. We found the string did contribute a significant amount of air resistance to the pendulum's damping, and in some cases, a greater amount than the bob.”

Shankar credits UW-Parkside as being instrumental in providing and preparing him for opportunities such as the American Physical Society competition. “As an undergrad, the research we do may not be ground breaking,” he said. “Graduate programs will look into a student’s ability to present information in an understandable and captivating manner. Being able to say I presented at an international conference is amazing in itself, but the weight of the award is colossal. I'm just happy and honored for the opportunities available at UW-Parkside.”

Shankar also praises the UW-Parkside faculty and staff who helped prepare him for the competition. “The faculty here really care about their students, and it's really thanks to my research advisor and professor Dr. Mohazzabi that I've been able to achieve everything I did. I was honored to be able to represent my school, for a student from Parkside to be recognized over the other amazing presentations and schools.) that were there is amazing!”

UW-Parkside physics professor Dr. Pirooz Mohazzabi is also very proud of Shankar’s success and what this validation means for the university. “Success of my students such as Siva gives me energy, momentum, and motivation for continuing to teach even after 43 years,” Dr. Mohazzabi said. “Siva is a brilliant student who will succeed in the future regardless of what he chooses to do or what route he decides to go. This month, he competed against not just a few colleges in the state, but against many major universities across the country.

“But Siva is not alone. I have had many excellent physics students at Parkside. Students who graduated and went on to be among the leading scientists in their field. Since 2014, the number of physics majors at UW-Parkside increased from just one to 26, and Siva was the first of an incredible group of students who declared a physics major during this time. This makes me and my department proud.”

The APS April Meeting discusses the full range of physical scales, from “Quarks to the Cosmos (Q2C)". Research was presented on topics from 19 participating APS units including particle physics, nuclear physics, astrophysics, and gravitation.

The APS was founded on May 20, 1899, when 36 physicists gathered at Columbia University. They proclaimed the mission of the Society to be "to advance and diffuse the knowledge of physics." The Society conducts extensive programs in education, public outreach, and media relations. APS divisions and topical groups cover all areas of physics research. Forums reflect the interest of its over 54,000 members in broader issues.