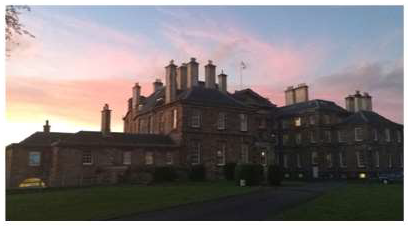 UW-Parkside Senior Marketing and Business Management major Tara Larson recently took part in the Wisconsin in Scotland program this past fall. The program is offered every semester through the UW System and takes place at Dalkeith House, a castle located 6 miles from the Scottish capital city of Edinburgh. Larson said she chose the program because it was affordable and offered opportunities for her to travel to other countries on the weekends and during breaks. In addition, Larson liked that she would be traveling with other Midwesterners like herself. "I wanted something that included local students, so I wouldn't be the only American thrown in with students from the home country," Larson said. 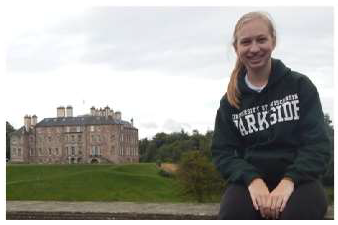 Once in Scotland, Larson experienced the gorgeous Scottish landscape and enjoyed seeing historic buildings everywhere, unlike anything she's ever seen in the U.S. She took weekend trips to Dublin, Prague, Amsterdam, and London during the 18-week program. Despite all of these other trips, her favorite one took place in the Scottish Highlands during a three-day bus tour with her Wisconsin in Scotland group.

"We stopped at numerous castles, landscapes, such as the Fairy Pools, and historic sites, including Loch Ness, which we got to swim in!" Larson said, "This trip was early in the program, so I think it allowed everyone to bond and get a lot closer, which was why I also enjoyed it so much." Back at the Dalkeith Castle, Larson took five classes, worth 15 credits, which transferred back to UW-Parkside.

Among these classes were two specifically about Scotland: Globalization and Heritage &Culture. In addition, Tara was also able to take International Business, which fulfilled an upper level degree requirement in relation to her major. More 2017 study abroad opportunities in Scotland are in store for UW-Parkside. Communications Professor Fay Akindes will be moving her classroom to Scotland in the spring of 2017. She will be teaching three courses; Media and Society, Intercultural Communication, and Gender, Race, Class, & Sexuality in Media, as part of the Wisconsin in Scotland program. The faculty will also be comprised of a professor from UW-Superior and two Scottish professors. Additional courses offered include Scotland: Heritage and Culture and Forests and Faeries of Scotland. Akindes said the trip will expand students' borders far beyond those at UW-Parkside. "Studying abroad reminds us that the world is our classroom. There is much to explore, experience, and learn," Akindes said. "Being in Scotland will intensify our study of media, culture, and communication in the 21st century." She hopes to organize field trips to the Highlands, like Larson's group, but is also looking forward to everyday life in Scotland visiting with locals and touring the churches, pubs, coffee houses of Edinburgh. Akindes mentioned one coffee shop in particular in Edinburgh, called the Elephant Room, where J.K. Rowling wrote the Harry Potter books.
"Ideally students will create blogs and use social media to chronicle their experiences in writing and photography and to share in real-time their experiences with people at home," Akindes said of the trip. "I expect it will be a stimulating and potentially transformative semester."

For more information on the Wisconsin in Scotland program, you can visit

Interested students are invited to afternoon tea and informational session on Tuesday, May 3,
at 3:30 pm in the Poplar Room. Contact akindes@uwp.edu for additional information and to RSVP.