SOMERS – Seven UW-Parkside students will receive the honor of being recognized as Outstanding Graduates during the Spring 2019 commencement ceremony on May 18. Of those seven, one student, Biological Sciences Major Julia Alberth, has been granted the prestigious Chancellor’s Award.

Julia was nominated by Drs. Christopher Noto and Robert Barber from the Department of Biological Sciences in the College of Natural and Health Sciences. Julia, a first generation, biracial college student with parents who emigrated from Mexico, began as a freshman at UW-Parkside in the Fall 2015 semester. She quickly distinguished herself amongst her peers and earned the respect and admiration of faculty, staff, and fellow students alike. Julia, boasting a cumulative GPA of 3.842, is an academically gifted individual who excels in both the classroom and the laboratory. She has been a consistent fixture on both the Dean’s List and Provost’s List throughout her time here, and is an exemplary candidate. 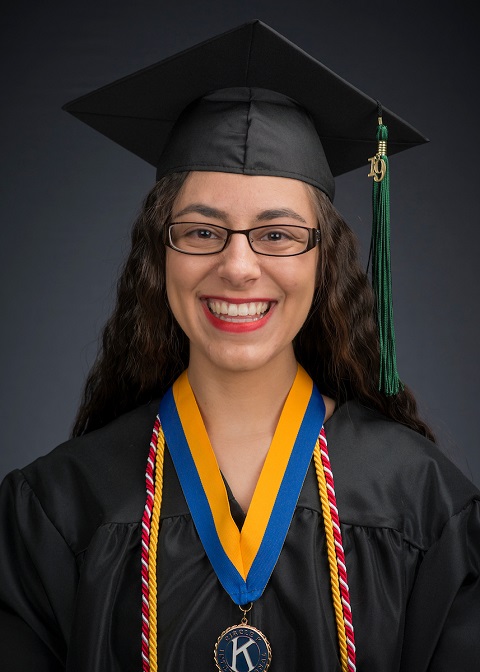 Julia’s commitment to her community is equally impressive. She has spent countless hours of volunteer work focused on public health and humanitarian issues. She was selected for the highly competitive “RUSCH” (Rural and Urban Scholars in Community Health) program. As a result of this program, Julia spent eight weeks in Summer 2017 as a research assistant to Dr. Sumona Saha for a project related to MyChart usage in managing inflammatory bowel disease. She has also been engaged in Students Modeling a Research Topic Team (SMART) regarding protein structure at the Medical College of Wisconsin for three years, as well as completing independent research involving mouse colony care with Dr. Fabian Preuss, and in psychology.

Julia has been accepted to four medical school programs (University of Wisconsin-Madison, Indiana University, Michigan state University, and Medical College of Wisconsin) based on her experiences and qualifications, a rare feat. She has earned a tuition-free ride to UW-Madison, which is a testament to her potential and achievements. After submitting her application for the M.D. program at UW-Madison, she decided to pursue a concurrent degree in public health, and has been accepted to a dual M.D./MPH (Masters in Public Health) degree program. This decision stemmed from her experiences serving as a volunteer at Women and Children’s Horizons, as well as serving as a mentor in the Big Brothers Big Sisters program.