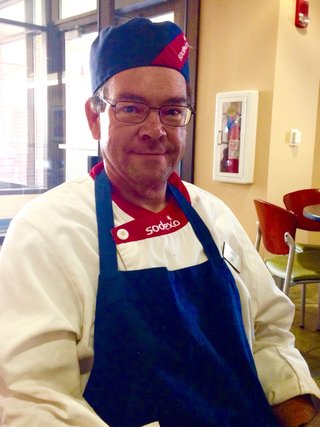 Every student here at Parkside loves lining up at the Brickstone to enjoy one of Chef Jeff's signature entrees. However, this year Chef Jeff came back to school 70lbs lighter, and everyone is curious to hear the secrets to his success.

Jeff said that his journey began when his doctor told him he had high blood sugar. They said he had pre-diabetes and it was his decision whether he wanted to start medication or not. Jeff didn't want to rely on medications or insulin so he chose to implement a dieting and exercise system.

He spoke with a diabetic dietitian and learned about what kinds of food he should be eating and the best exercise tips. The dietitian recommended that he should limit himself to 1400-1500 calories a day. He also watches his carbohydrate intake so it doesn't exceed 150 per day. His dietitian also recommended that he walk for 30 mins a day, three days a week. Jeff took that to the next level by walking 30 mins a day, every day. He quickly increased this to 45 mins a day, and now every day he walks 4 miles in one hour.

Jeff said the hardest part of this diet has been avoiding sweets and pasta. It's been tough because he really loves brownies and cookies, but he has learned to avoid them completely. However, he still treats himself to some ice cream every once in a while.

This experience has been truly rewarding for Jeff because he feels healthy and his cholesterol is perfect. He has lost a total of 70lbs so far, and he has just 9 more to go to reach his goal of 160lbs. Jeff wants everyone to know that being healthy is important. He said, "Anyone can lose weight. Losing weight is easy. It's keeping the weight off that's the hard part."

Well Jeff, you're doing a great job at both, and the Parkside community applauds you. Thank you for being a role model to the students and staff here, as well as everyone's favorite chef!