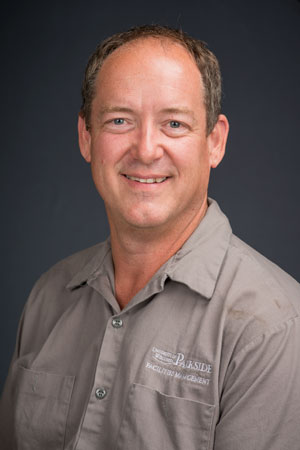 Dale takes tremendous pride in the Heating and Chilling Plant and his crew of operators. This pride is never more evident than during a tour, by Dale, of the plant. It is truly informative and fascinating experience and its because of the pride Dale takes in his work. The Heating and Chilling Plant is the lifeline of any university. If the plant fails the university does not operate, and Dale takes that responsibility very seriously. Dale also cares about the welfare of the campus and the staff. He is meticulous about procedures and safety because he wants things to work properly and for people to go home at the end of the work day.

If you ask Dale what he does, he will tell you that he “boils water”. While that is true, Dale does and has done much more than that. Dale was instrumental in information gathering, technical advising and advocacy for the much-needed renovations to Wyllie Hall, and even became a small screen star in the process – starring in a video that became a key component in the Wyllie Hall renovation project becoming a reality.

Following the retirement of the previous Facilities Management Director and the departure of other Facilities Management leadership staff Dale volunteered to lead the Facilities Management department in addition to his role running the Heating and Chilling Plant until a new director could be hired. Dale’s level of care also extends beyond Parkside and into the local community through his work with the Meals on Wheels program, or his willingness to help a friend or co-worker with a home repair job. Dale has truly been an asset to Parkside and the community.