Published: June 24, 2015
SOMERS -- The sidewalks of Madison's iconic State Street are always filled with posters and handbills promoting an endless array of arts and entertainment. In the near future, if Danielle Breisach has her way, one of these flyers may announce the premiere of a chamber-music ensemble. 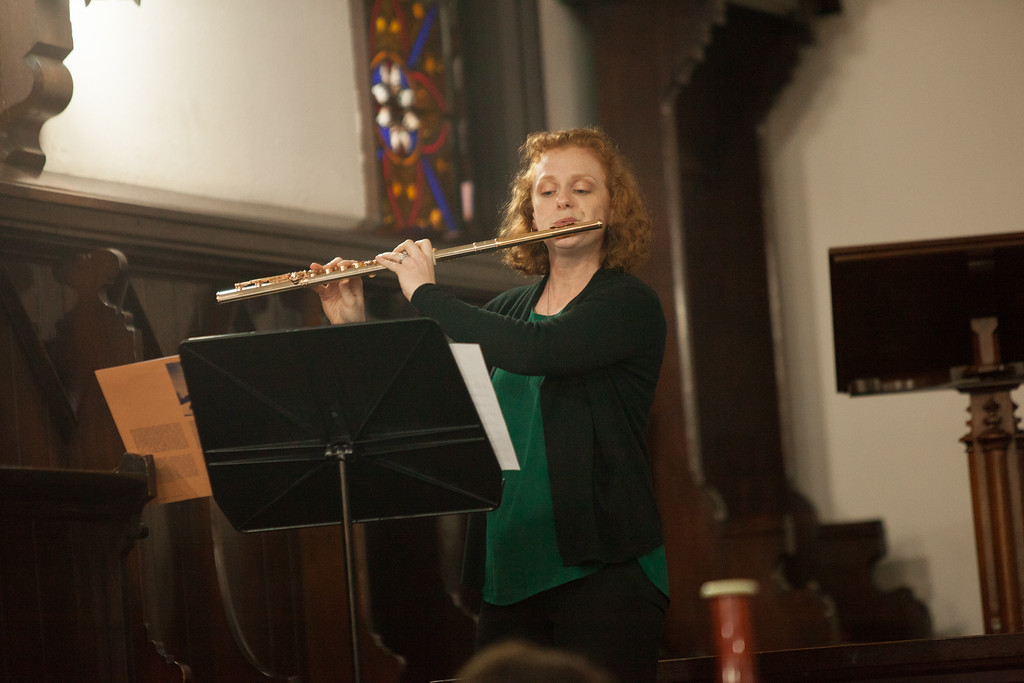 Breisach is pursuing her D.M.A. in flute performance at UW-Madison. This summer, she participated in the fresh inc chamber-music festival. This one-of-a-kind event under the guidance of Chicago's Fifth House Ensemble redefines the training process for emerging chamber-music composers and instrumentalists (read more about fresh inc). "There are a lot of organizations where you can have your beliefs affirmed," said Melissa Snoza, executive director of Fifth House Ensemble. "We're one where beliefs can be challenged."

In addition to music, the festival provides emerging artists with needed information to help start new ventures in the professional world. Workshops cover topics such as starting a small business, how to market, fund raising, budgets, and how to sell and appeal to performance venues.

"In the immediate future," Breisach said, "I see this helping me learn how to run the Madison Flute Club more successfully." She is an artistic co-director for the club, which has been in existence for 23 years.

"I started with the group in 2012 and it was very much geared toward amateur community flute players who wanted a place to play their instruments and put on a handful of concerts each year," she said. Today, the Madison Flute Club is becoming a more diverse organization complete with a large flute choir, a smaller, auditioned group and youth flute ensembles.

Breisach became aware of fresh inc when she saw a poster on her professor's office door. Breisach chose UW to further her studies after earning undergraduate and graduate degrees from Western Michigan University. It was UW Flute Professor Stephanie Jutt who lured Breisach to Madison. "She is just so energetic and friendly," Breisach said of her professor.

The poster on Jutt's door made Breisach aware of the festival and a friend who attended fresh inc in 2014 sealed the deal. "He said it was one of the best festivals he had ever been to in preparing someone who is leaving school for a profession in music," Breisach said. "It opens up several possibilities in terms of what you can do outside the realm of a traditional career in music."

When Breisach started her university career at Western Michigan, she wanted to become a public-school music teacher. It didn't take her long to learn to develop a passion for playing and teaching flute. "Then I got involved in some other things and realized I liked doing chamber music," she said. The goal now is to make chamber music and flute performance viable parts of her career.

Which is exactly the mission of fresh inc.

When Breisach looks a bit further into the future – well, that's where the handbill on State Street comes in. "A friend and I have been talking about starting a chamber ensemble," Breisach said. "Something similar to what Fifth House is in Chicago; doing something like that for Madison."

Jutt is already involved in a popular Madison summer festival: the Bach, Dancing and Dynamite Society. "BDDS attracts a more diverse crowd of people; and it's definitely a relaxed, fun atmosphere," Breisach said. "Something like BDDS, but all year long with an educational component and collaborations with up-and-coming composers would be an important addition to what Madison has to offer."