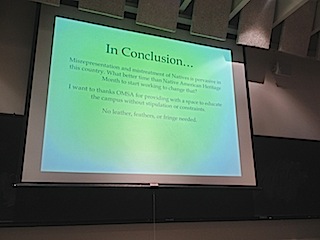 A PowerPoint slide from the gripping presentation “Debunking Thanksgiving,” with Heather Kind Keppel.

The Speak Out: “Debunking Thanksgiving,” discussion was another element to Native American Heritage Month here at Parkside. Hosted by Heather Kind-Keppel on Monday at 12pm, the event sought to give listeners a new perspective on the origins of Thanksgiving, and to shed light on its misconceptions. Heather Kind-Keppel opened up the discussion by reminding listeners that history is “written by the victors,” a revelation that was clear throughout the discussion.

The present depiction of Thanksgiving is the brainchild of Sarah Josepha Hale, an editor and the author of the nursery rhyme “Mary Had a Little Lamb.” She was able to move president Abraham Lincoln to push for legislation to make Thanksgiving the national holiday we recognize today.

However, the concept of having a day to feast in the fall months was a concept originally inspired by the Pequot’s and their Green Corn Feast to celebrate the harvest, and then followed suit after Pilgrims held a feast to give thanks to God for their victory of the extermination of 700 unarmed sleeping Pequot’s in one of their long houses. Unfortunately, the tale of Pilgrims and Native American’s working together to share a unified harvest meal is quite opposite of the truth.

Pilgrims themselves were religious fanatics, so much so that Puritans found them to be too extreme, and did not want to live in unity with them. The Pilgrims were adverse to any hard work, and had no discernible skills because they had been raised with money in their home country. The local Wampanoag tribe had considered eliminating the newly established Pilgrim villages, or to let them ruin themselves, but they took pity and taught them proper agriculture. Elders of the surrounding tribes had even seen vivid visions of vast Pilgrim settlement, and had predicted that this would be the end of their people.

Small pox and Pilgrim destruction would be the two factors that would lead to the Native American ruin. This history is not the history that is taught in schoolbooks, however. The falsified vision dreamt up by Sarah Josepha Hale is seen as the reality for the majority of American’s, and this lovely perception of unity is a positive one, but inaccurate. Slowly but surely, reconciliation is taking place, and Thanksgiving lesson plans are turning from the Native American stereotypes, and focusing more on appreciating the world around us.

At Parkside, we are thankful that we are given a wide array of perceptions and ideas surrounding all facets of our world. We are grateful for our diversity, and to have the opportunity to learn information we may not have been taught in schools or universities prior to Parkside. Native American Heritage Month does not stop here, there is a Dream catcher Workshop today at 12 pm in the Den, and a presentation given by the President of the National Indian Educational Association on November 25 at 11:30 am in the Hickory Room. Check out all of our upcoming events at Parkside, and remember, the information we learn here at Parkside is Real Amazing!