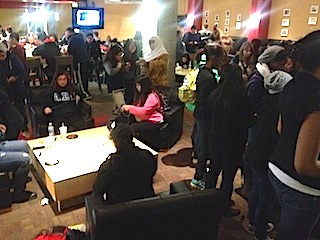 Students collaborating in the Den to create their own dreamcatcher’s, as a part of Native American Heritage Month.

Native American Heritage Month has taken hold of Parkside yet again with an interactive Dreamcatcher Workshop. This event was held Wednesday at 12pm in the Den, and gave students the opportunity to learn about Native American culture hands-on.

Dreamcatcher’s are often thought of as a widespread Native American art form, when in fact, there are only two main tribes that practice creating them – the Lakota, and the Ojibwe tribes. Students also learned that dreamcatcher’s that are quite large, colorful, and symmetrical are often just made for tourists.

A true and authentic Native dreamcatcher is often made with an imperfect circle from vines or other material’s, and are more function based rather than as a piece of art. Dreamcatcher’s are designed to filter out bad dreams from the good, and to keep you at peace while you sleep. The proper place for a dreamcatcher to be is in one’s bedroom, above their bed and near a window to be at the peak of functionality. A car or other location is not well suited for a dreamcatcher.

When creating their own dreamcatcher’s, students were frequently stumped – it is much more difficult than it may appear. The key aspect of their creation is to ensure that there are 7 points all around the circle, and to interconnect them as you go along. The metal of the ring also needed to be entirely covered by the colorful leather strings that were given. In order to personalize them, students were given an abundance of choices for creation– ring size, the color of the leather, beads, and feathers.  The more natural, the more authentic a dreamcatcher will be.

While Native American Heritage Month is coming to a close at Parkside, there is still opportunity to take part in the events. There is a conversation entitled “When Will I Be Human?” with Melvin Monette, the President of the National Indian Education Association, from 11:30am to 12:30pm in the Hickory Room on November 25th. You’re invited to attend this, or any of our other events held at Parkside. Don’t miss out, our events here at Parkside are Real Amazing!