Drive Sober or Get Pulled Over: Statewide safe-driving initiative

SOMERS, Wis. - University of Wisconsin-Parkside Police and Public Safety officers will be out in force along with other law enforcement agencies throughout Wisconsin for the “Drive Sober or Get Pulled Over” crackdown on drunken drivers from Aug. 20 to Sept. 6.

According to the Wisconsin Department of Transportation, there were 167 fatalities last year in 6,050 alcohol related crashes in 2020. About every 3 hours someone is injured or killed in an alcohol related crash. In addition to alcohol related offense many states are seeing a growing problem with drugged driving. People whose ability to safely operate a motor vehicle is compromised by legal medications (prescription over the counter) and/or illegal drugs. In 2020 there were 2,050 crashes which involved drugs which resulted in 80 fatalities. Teenagers are more likely than anyone else to be killed in an alcohol related crash according to the CDC. In Wisconsin, 563 drivers under 21 were suspected of being under the influence of drugs or alcohol in 2020.

Drunken driving is entirely preventable. If we can deter people from getting behind the wheel when they’re not sober, we will make progress toward the goal of reaching zero preventable traffic deaths in Wisconsin. If you see a driver that you suspect is impaired, call 911 and provide as much detail as can regarding the driver, the vehicle, and specific location.

The message during the “Drive Sober or Get Pulled Over” campaign and throughout the year is simple: If you’re driving while impaired, you will be arrested. The devastating consequences of a drunken driving arrest include major embarrassment, expenses costing up to $10,000.00 mandatory installation of an ignition interlock device on all your vehicles, and possibly jail time.

Driving drunk will be a decision you’ll regret the rest of your life, if you are lucky enough to live. Instead of risking an arrest and possibly a violent crash, we urge everyone to make responsible decisions. Choose a sober designated driver before you start drinking. If you’re feeling buzzed, it’s likely that you are over the 0.08 blood- or breath-alcohol limit and should not drive, find another way home such as public transportation, a taxicab or ask a sober friend to drive you home. 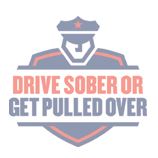