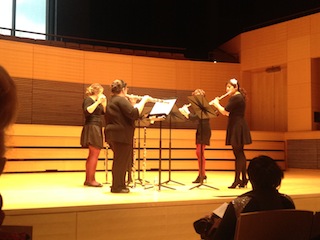 A performance by the UW-Parkside flutists in the BMO Harris Noon Concert Series.

Last Friday we had the delight of enjoying the UW-Parkside Flute Ensemble, with director Jan Bjorkman, as part of the BMO Harris Noon Concert Series. The performance was held in the Frances Bedford Concert Hall, and consisted of five performers in unison playing selections from four works. The performers, Gloria Garay, Kimberly Hetelle, Anna Knop, and Vera Olguin, alternated positions, giving focus to different performers during each piece.

The first selection was from “Royal Fireworks Suite” by George Frideric Handel and arranged by Nora Kile, a piece that originally served as the accompaniment for a grand fireworks display in London’s Green Park. They played 4 sections of the suite: Bouré, La Paix, La Rejouissance, and Minuet I and II. All were very lively and lighthearted.

The second selection was “The Last Rose of Summer,” which is a poem written by Thomas Moore. Moore was inspired to pair his poems with famous Irish Melodies, this one being called “Aisland an Oigfear.” This traditional Irish melody was arranged by Ervin Monroe.

The third work performed was entitled “Madrigal” by Philippe Gaubert, and arranged by Ervin Monroe as well. “Madrigal” stood out as unique because its content sounded more conflicted and complex, creating a distinct sense of urgency, with intermingled sparks of romance. This melody was created at the peak of the Italian Renaissance.

The finale of the performance rounded off with “Salt of the Earth,” by Catherine McMichael, which the flutists sat for, having stood for the previous three works. This melody seeks to induce the attitudes of the Oklahoma landscape and its subsequent struggles historically. The piece was comprised of five sections, all distinct from one another, traveling space and time to evoke the highs and lows of the Oklahoma land.

All of the melodies performed by the UW-Parkside Flute Ensemble were cheer-worthy and very impressive. The UW-Parkside Music Department encourages attendance at future performances. This Friday, the BMO Harris Noon Concert Series continues with the UW-Parkside Guitar Ensemble and La Camerata, and this Saturday, at 7:30pm in the Bedford Concert Hall, the UW-Parkside Symphony and Community Orchestra will be performing. Keep up to date with all of our Real Amazing musical performances at Parkside, and be sure to attend our upcoming events and concerts.