UW-PARKSIDE CELEBRATES A HALF CENTURY OF STUDENT SUCCESS

The University of Wisconsin-Parkside Foundation hosted the 50 Years Gala on Friday, Oct. 12, celebrating the university’s 50th anniversary and raising funds for a new need-based scholarship.

UW-Parkside Chancellor Debbie Ford told the crowd of nearly 300: “Nothing makes me more proud as a leader than when people in our community recognize the strength and vibrancy of this campus. They believe in our students and graduates so powerfully that they step forward to make a significant investment in their success.”

Alumni and friends of the university gathered in the UW-Parkside Student Center Ballroom for the university’s premier 50th anniversary event. Proceeds from the 50 Years Gala will help establish the Future Focus Scholarship.

Tim Mahone, president of the UW-Parkside Foundation Board of Directors called the establishment of the Future Focus Scholarship a bold goal that would make a lasting impact on student success for decades to come. 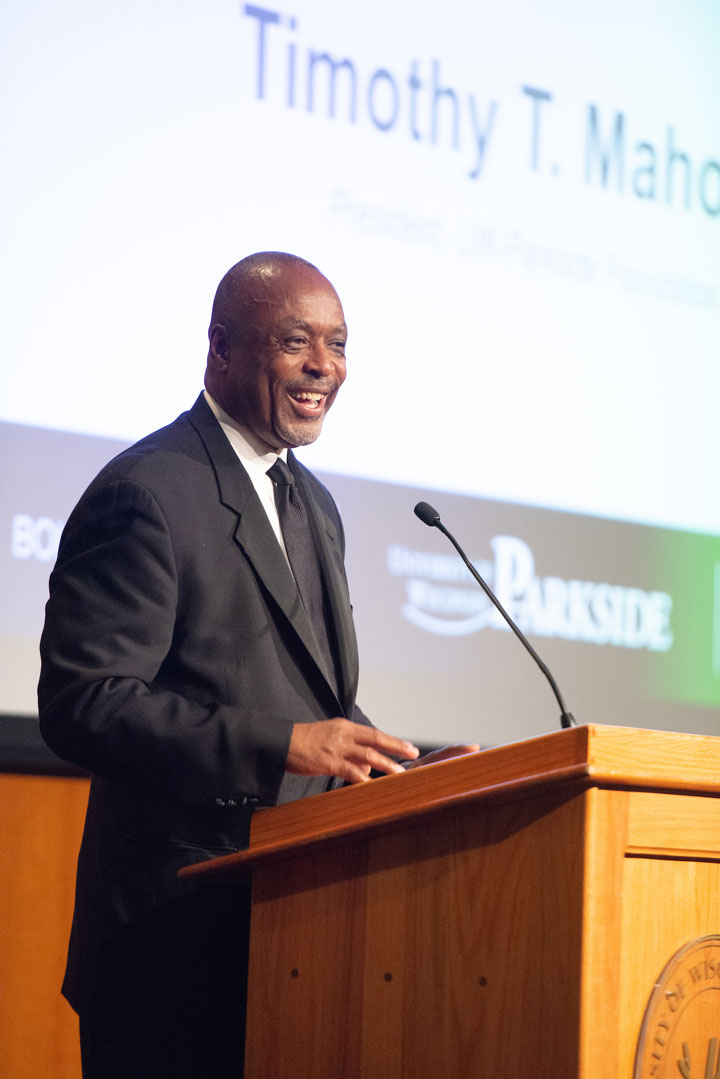 “The foundation,” Mahone said, “is committed to providing access to high-quality education for the students and families of southeastern Wisconsin. The Future Focus Scholarship is a shared vision of the foundation to establish the single largest fund specifically addressing student need. We’re investing in our students so they are better prepared for all the opportunities to come.”

“Support from the community is a testament to relationships developed over the past half century,” said John Jaraczewski, UW-Parkside assistant chancellor for University Advancement. “UW-Parkside graduates provide the talent and leadership companies and organizations need to sustain their own legacies of success.”

Michael Bond, supplier diversity manager for Snap-on Incorporated, said his company’s support for education is in its fabric. “We are proud to have supported Parkside through the decades … and Snap-on is proud to be one of the first supporters of the Future Focus Fund,” Bond said. “The Future Focus Fund will be there as a resource to meet the needs of hard-working students.”

Popp, who serves as president and chief executive officer at Johnson Financial Group, said the values and the purpose of UW-Parkside align with those of his company.

“For 50 years, UW-Parkside has invested in the growth, the health and the well-being of our communities and the people who live here,” Popp said. “All of us at Johnson Financial Group are proud to be partners with UW-Parkside and we look forward to the next 50.”

The gala featured many perspectives on UW-Parkside’s past, present, and future. Alumna Rebekah Kowalski, a 1997 graduate now employed as vice president of client workforce solutions at ManpowerGroup, remarked on her experience and the impact of UW-Parkside faculty from numerous academic disciplines.

Terrill Taylor, a biological sciences major from Racine, shared the ways in which UW-Parkside faculty have encouraged him to succeed. He said the first years at UW-Parkside were challenging – academically, emotionally and socially – partly because of his own expectations. “I thought, because I am the only African American in my science classes that my peers and my professors wouldn’t take me seriously,” Taylor said. “I was hesitant to ask questions. I was insecure because I didn’t want others to think that I didn’t know what I was talking about.” 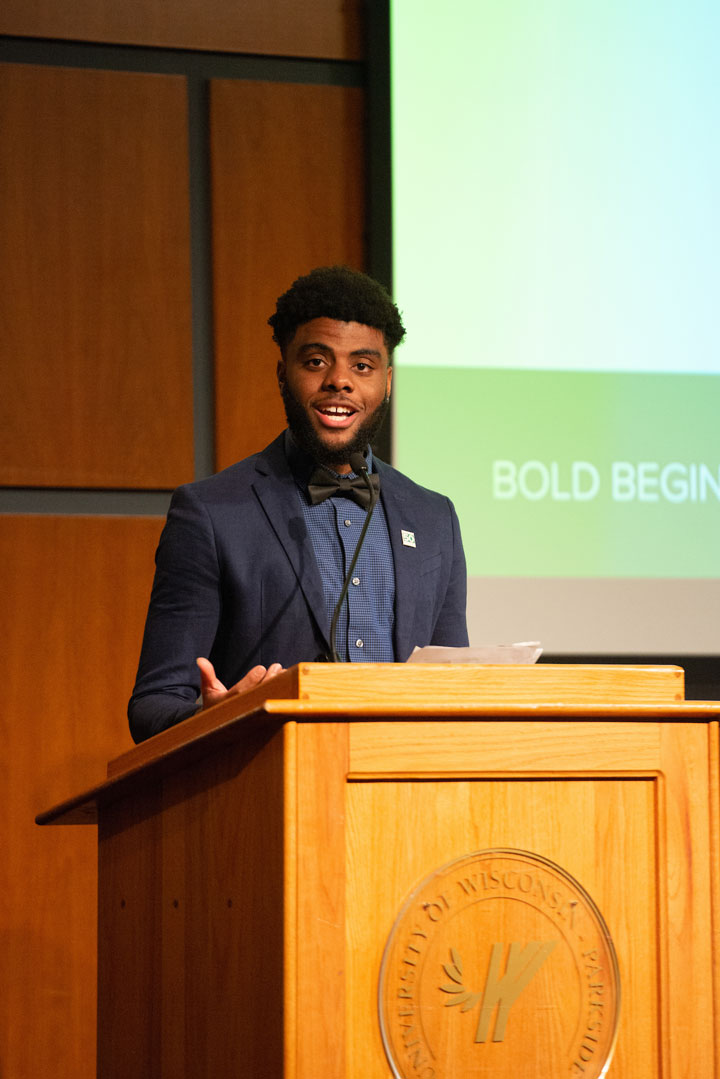 Rather than give up, Taylor sought advice and guidance from UW-Parkside faculty. “The professors at Parkside are truly amazing,” Taylor said. “I experienced nothing but support and care, and I always see their willingness to help whenever I need it.”

Taylor’s success in the highly competitive and highly successful UW-Parkside pre-med program includes acceptance in the UW RUSCH program (Rural and Urban Scholars in Community Health) at the UW School of Medicine and Public Health.

During the RUSCH internship, Taylor studied with Dr. Tracy Downs, who is also African American. “It was awesome building that relationship with him and being taken under his wing,” Taylor said. “This is just one of the opportunities I have been able to experience at UW-Parkside.”

Taylor is a scholarship recipient and acknowledged the importance of financial support. “It really makes me happy to see you here tonight,” he told the audience, “taking time out of your lives to help students across our campus get the support that they need to be successful.”

Taylor introduced Dr. Bryan Lewis, associate dean in the UW-Parkside College of Natural and Health Sciences. Taylor called Lewis the person who helped him believe in himself.

Taylor is not the only student Lewis has influenced. “When I first came to UW-Parkside in the summer of 2000 we had approximately 150 students in the pre-health program,” Lewis said. “Now we have well over 700.”

Chancellor Ford concluded the event by announcing anniversary fundraising progress, including a gift from Kathryn and Charles Heide Sr. of Somers, Wis., establishing the C.P. and Anna Heide Endowed Scholarship.

“The Heide family’s generous support will ensure that our university continues to be a transformational place for more and more students, far into our future,” Ford said. 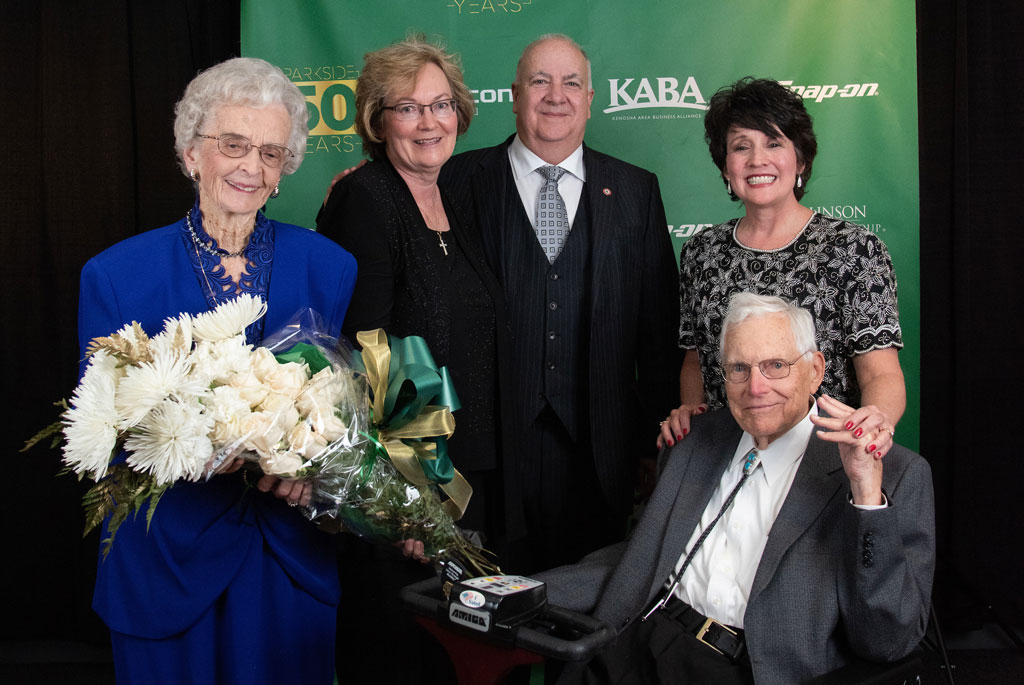 In addition to the Future Focus Scholarship and the Heide Endowed Scholarship, donors to UW-Parkside and the UW-Parkside Foundation have committed more than $1 million in new gifts in honor of the university’s 50th anniversary.

“Tonight, we’ve raised more than $300,000 for the Future Focus Scholarship,” Ford said, “and we are still accepting investments in student success. Think of how many UW-Parkside students will have their futures changed thanks to you. Truly, we have much to celebrate.”

Fundraising and anniversary celebrations continue throughout the 2018-19 academic year. The public is invited to participate. For additional information, visit www.uwp.edu/50years. 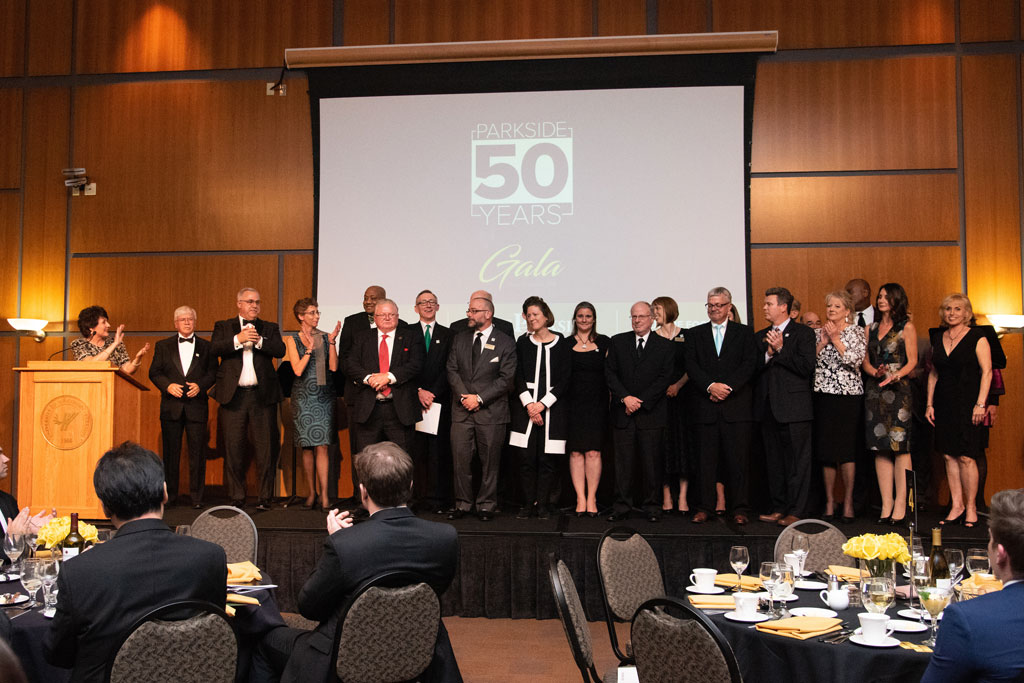