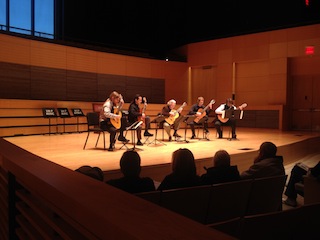 The Guitar Ensemble performing Allegro from Concerto opus 3, no. 6. 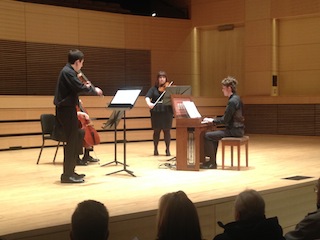 The BMO Harris Noon Concert Series continued this Friday with two performances – the UW-Parkside Guitar Ensemble and La Camerata. They took place in the Bedford Concert Hall, and hosted a wide array of sounds and melodies, each piece being distinct and different from the next.

For the first half of the Noon Concert Series, the Guitar Ensemble performed 4 different pieces. Guitarists Jamey Buencamino, Nicholas Culotta, Kyle Dolgner, Matthew Mifflin, and director George Lindquist sought to give audiences several different musical styles, as the director explained the background and typology before each piece played. The first two pieces, Allegro from Concerto opus 3, no. 6 by Antonio Vivaldi, and Pavane by Maurice Ravel, were pointed out as two very popular pieces and were likely to be recognized to an adept ear. Allegro was originally written for violins, and Pavane was originally written for pianos, and then rearranged for an orchestral performance, and then guitars – the song was poetic, and signifies the death of a princess.

Milonga by Enrique Cabezo was a trio performance with Nicholas Culotta, Kyle Dolgner and Matthew Mifflin. A flavorful song with a Latin melody was enhanced when one of the performers tapped on his guitar, giving the piece a very distinctive sound. The ensemble ended their performance with the melody entitled Toccata, by Leo Brouwer, which is a newer piece that had a wide range of rhythms, going from highs to lows very quickly and chaotically.

La Camerata followed the Guitar Ensemble with director Alvaro Garcia, Kimberly Hetelle playing the flute, Max Feiler on violin, Melissa Hardtke on the viola, Evan Humphreys on the cello, and Alexander Poyner on the harpsichord. La Camerata comprised of two works – Secondo Ballo detto la Serena with an anonymous composer, and Trio Sonata by Francisco Antonio Bonporti, which consisted of 3 works and a prelude within one performance.

La Camerata filled the room wall-to-wall with sound even though there were only 6 people performing. The first piece, Secondo Ballo detto La Serena was very festive, almost royal sounding. For the second piece, Trio Sonata, the director and flutist left. The four performers remaining carried a wide array of melodies, however the piece itself remained light hearted and powerful.

The musical performances here at Parkside are always more than a pleasure to experience, and you’re invited to attend future events being held – the next being the UW-Parkside Jazz Ensemble on December 2 at 7:30pm, and then the UW-Parkside Percussion Ensemble as a part of the Noon Concert Series on December 5. Be sure to pencil these performances into your calendars, and remember, our concerts here at Parkside are Real Amazing.