Apparently, someone forgot to tell the UW-Parkside men's basketball team that it wasn't supposed to be this good this year. In a Great Lakes Valley Conference preseason poll of coaches, the Rangers were tabbed to finish just below the middle of the pack in the GLVC East Division. A pair of thrilling overtime victories last week, at Truman State Thursday night and at Quincy on Saturday, kept the Rangers atop the East Division with a 13-2 mark.

On top of that, Parkside sits at No. 17 in the National Association of Basketball Coaches Division II poll. Only GLVC rival Bellarmine (20-4, 13-2 GLVC) is ranked ahead of the Rangers (20-3 overall). The Rangers defeated Bellarmine in overtime back on Jan. 21.

Leading the way for the Rangers is Andy Mazurczak. The senior guard was named Academic All-District by the College Sports Information Directors of America and has earned the GLVC Men's Basketball Player of the Week honor three times this season. 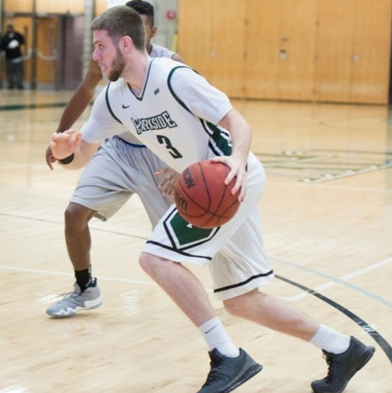 Mazurczak hasn't let the awards go to his head. In the overtime victory at Truman State, he scored 40 points, 32 coming in the second half and overtime. Kenosha News coverage. Saturday against Quincy, Mazurczak tossed in 26, including the game-winner with 0.2 seconds remaining.

The Rangers close out their home regular season at 7:30 p.m. Thursday, Feb. 18, vs. Saint Joseph's and at 3 p.m. Saturday, Feb. 20, vs. the University of Indianapolis. Both games are in the De Simone Gymnasium.