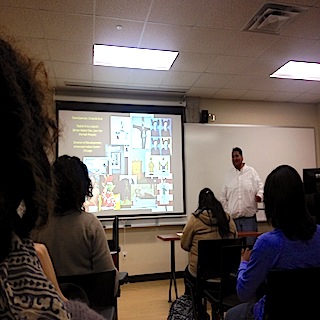 A full classroom enjoying and learning about Native American art during the Native Art Presentation with David Spencer.

The Native Art Presentation with David Spencer Was a Hit!

Published: November 12, 2014
By: Sheridan Shumsky
Last Monday, we welcomed David Spencer, who stands as the director of development for the American Indian Center in Chicago. Spencer was here to enculturate students with his Native Art Presentation, and to give us information on his own journey to developing his Native American identity as well as his take on Native American art.

David Spencer describes himself as both a member of the Navajo and Choctaw tribes, but is a standing member in the Choctaw tribe, having lived on a reservation in Mississippi. Spencer’s first lesson was that Native Americans, in describing their ethnic identity, do not find tribes nearly as important as clans; a tribe gives you a glimpse of what geographical region you are from, while a clan gives a more precise description of what family you are from, and you often introduce yourself to other Native Americans by first giving your name, and then your clan.

In order for any artwork to be considered Native, it must be created by a Native artist, despite what the imagery of the artwork is. One example of Native artwork that Spencer shared was a painting entitled “Indian’s Summer” from 1984 by Bill Powless, otherwise known as Mohawk, which caused a great deal of controversy in its heyday. Native American’s were greatly offended by the depiction of an obese tribal member, but Spencer viewed it as a realistic representation of Native American’s – the very fit and long-haired man riding a horse is no longer the reality. David Spencer believes that Native American’s are in a “perpetual state of nostalgia,” and urges for a modern take on his people.

One example of that modernity he seeks is the brief video entitled “Smiling Indians,” by Ryan Red Corn, that dashes the somber photos of Native Americans depicted by Edward Curtis in the early 1900’s. These photos are still viewed today as an accurate representation of Native Americans, and this video of them smiling seeks to show that these photos are an outdated and an incorrect way to depict a cultural identity. From past to present, Spencer touched on various artistic mediums and themes in order to give a wide range of understanding of what native art is, and what it means to be Native American - he often referred to the Navajo idea of “hózhó,” which roughly translates to “walk in beauty,” and to live a balanced life - this is the type of representation that Spencer seeks to ingrain in our society.

This presentation was a part of the Native American Heritage Month events, which are continuing throughout the rest of the November. Check out all of our Real Amazing upcoming events.