For three weeks in July, Melissa Acosta will be working in Arlington, Texas, just a few miles from the game-day homes of the Dallas Cowboys and Texas Rangers. What might surprise some is that Acosta's "work" -- in one of the most developed communities on the planet -- involves dinosaur and crocodile fossils more than 90-million-years old. 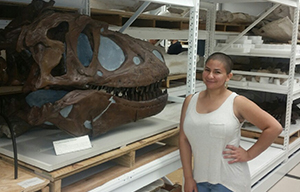 Melissa Acosta at the Field Museum in Chicago

Acosta, a University of Wisconsin-Parkside biological
sciences and pre-med major from Waukegan, Ill., is part of a fossil dig supported by the National Geographic Society. UW-Parkside Assistant Professor of Biological Sciences Dr. Chris Noto received the $30,000 grant to continue work originally started in 2003. Noto was first involved in 2010.

Acosta is receiving support from the Wisconsin Alliance for Minority Participation (WiscAMP), a program supported by the National Science Foundation that provides financial assistance to undergraduates involved in summer research. 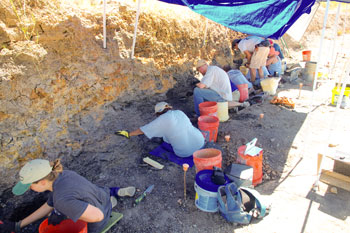 In the heart of the Dallas-Fort Worth Metroplex exists a treasure trove of fossils from the Age of Dinosaurs. Discovered by amateur fossil hunters Art Sahlstein, Bill Walker and Phil Kirchoff, the area is undergoing rapid residential development. The fossil site, now known as the Arlington Archosaur Site (AAS), preserves a nearly complete ancient ecosystem 95-100 million years old.

At the time, most of Texas was covered by a shallow sea. Dallas-Fort Worth formed a large peninsula that created a lush environment of river deltas and swamps teeming with wildlife, including dinosaurs, crocodiles, turtles, mammals, amphibians, fish, invertebrates, and plants. Many of the fossils found here represent new species unknown to the world and are unique to this part of Texas. 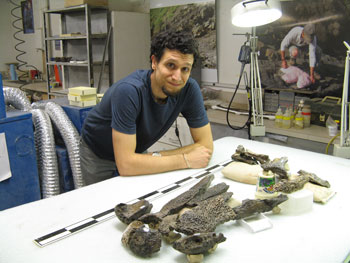 As the principal investigator, Noto heads a project team that includes Acosta, Stephanie Drumheller-Horton, assistant adjunct professor in earth and planetary sciences at the University of Tennessee, Thomas Adams, curator of paleontology and geology at the Witte Museum in San Antonio, and Anthony Fiorillo, chief curator of earth sciences and vice president of research and collections at the Perot Museum of Nature and Science in Dallas.

Funding from the National Geographic Society will be used to continue excavation and study of this unique fossil locality and support excavation work at the site through summer 2017. Teams of scientists and trained volunteers will work to recover as many fossils as possible before completion of a nearby residential development.

"These conservation efforts are important for supporting the ongoing work at the AAS, but the rapid pace of development in the area means the long-term future of the site and its fossil resources is less certain," Noto said. "Therefore it is critical that we collect as many fossils and other data as possible now while continuing to demonstrate the scientific, educational, and cultural value of this site to the community."

According to Adams, research has traditionally been focused on either the Early or Late Cretaceous, which have proven to be incredibly fossil-rich. "The diversity of fossils and the number of species being discovered at the AAS is providing a true picture of an ancient coastal ecosystem that existed 95 million years ago," he said. 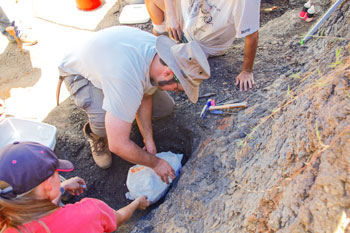 The sponsored research will expand the group's scientific study of the site allowing new analyses of the rocks enclosing the fossils, including techniques such as palynology (the study of fossil pollen and spores), stable isotope, X-ray diffraction (XRD), and X-ray fluorescence (XRF), which will reveal important details about the ancient climate and environment that existed at this time during the Cretaceous.

Working with these fossils will help scientists better understand how Texas fits into the larger picture of faunal change that was happening through the middle of the Cretaceous Period, around 90-115 million years ago. Very little is known about this turnover in North America, and the AAS preserves one of the best fossil records for this time, providing a critical window into this important transitional period.

As the name suggests, archosaurs, or the group that includes dinosaurs (including birds) and crocodilians, are the most common fossils at the AAS. Bite marks and skeletal material from a large fossil crocodile indicate crocs were actually the top predators in the rivers and swamps of this part of Cretaceous Texas. "We call the Mesozoic the Age of Dinosaurs for a reason," said Drumheller-Horton, "But people sometimes forget that other kinds of animals lived in these environments, too. Fossils from the Arlington Archosaur Site preserve evidence that the crocs were major predators in this ecosystem, even eating the dinosaurs that lived there." 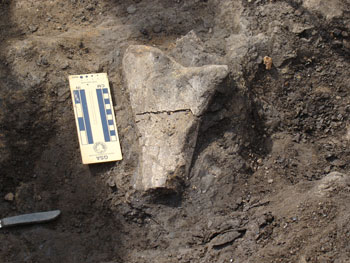 Plans are under way to perform detailed computed tomography (CT) scans on a selection of turtle and dinosaur fossils that exhibit pathologies (such as injuries or infections) to better understand what formed these structures and what they can tell us about how the animals lived and died.

From its first discovery, the AAS has been an important tool for science education and outreach. Trained volunteers from the community, who are passionate about preserving this important resource, perform the majority of the fossil excavation. This is an unprecedented opportunity for the public to be involved in a scientific excavation, sharing their experiences directly with the community. Research stemming from the National Geographic grant, and bolstered by public donations through the crowd-funding site Experiment.com, will help extend the educational reach of the site beyond the Dallas-Fort Worth area through the creation of materials such as 3D models, teaching materials, public lectures, and website articles.