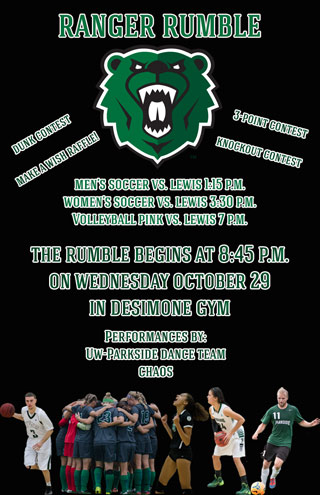 First-Ever Ranger Rumble Event to cap off Soccer and Volleyball vs. Lewis University

The University of Wisconsin-Parkside athletic department and the Ranger Student-Athlete Advisory Council (RSAAC) invite you to the first-ever Ranger Rumble on Wednesday, Oct. 29 inside DeSimone Gymnasium.

On October 29, men’s soccer, women’s soccer, and volleyball all take on Great Lakes Valley Conference rival Lewis University. Men’s soccer kicks off at 1:15 p.m. at Wood Road Field, followed by the women’s game at 3:30 p.m. Volleyball begins at 7 p.m. inside the DeSimone Gymnasium.

Students who attend these events receive raffle tickets for a drawing during the Ranger Rumble event, which begins immediately following the volleyball match around 8:45-9 p.m. Several prizes will be given to students including a chance to shoot a half-court shot to win free Domino’s Pizza for a year. All Students attending Ranger Rumble receive a t-shirt for a $1 donation to the Make-a-Wish foundation.

The Ranger Rumble event features performances from the Ranger dance team, and Chaos, a shooting contest with both the men’s and women’s basketball teams, a game of lightning for the entire student body, a Ranger “Minute To Win It” challenge between all 15 of Parkside’s athletic teams, and concludes with a dunk contest. Student-athletes Justin Armstrong and Tara Knapstein will MC, and music will be provided by Parkside’s student radio, WIPZ.

Don’t miss this event, it is going to be #realamazing!