Parkside to Germany to Stanford and Back

When we last left Simmi Bharvani, she had just returned from her research opportunity in Braunschweig, Germany, and was on her way to California. The senior psychology and biology major from Racine, conducted research at Lake Stadtgraben which involved collecting data to determine whether there would be an algae bloom in the lake this year, along with researching circadian rhythms of Cyanobacteria. 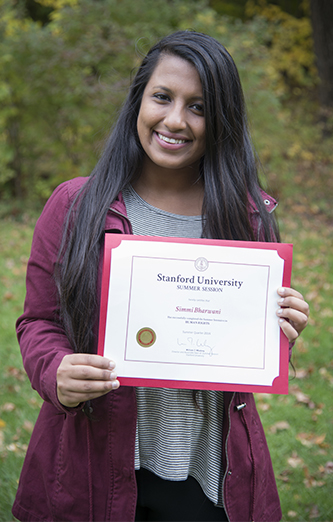 ng to learn about something so different" Bharvani says. "I would have never considered learning about algae in such great detail if it wasn't for the research." Bharvani's studies at the University of Wisconsin-Parkside are preparing her for medical school, where she will be headed after graduation in May 2017.

While in Germany, Bharvani also took computer classes where she learned about robotics and how to help with image processing. When she returned to Wisconsin in early June, her summer academic adventures continued in California at Stanford University where she received a scholarship to work on a human-rights certificate program.

"I thought that I was mainly competing against domestic students," Bharvani says regarding the Stanford application process, "but it turns out I was competing with people from all over the world."

In the months leading up to her Stanford opportunity, Bharvani and several other students in the program who came from all over the world connected through social media. They met in San Francisco a few days early, stayed together at a hostel, did some sightseeing, and prepared for what turned out to be a challenging and enlightening summer.

Bharvani took two classes at Stanford. The first, "Media and the Identities in the Globalizing Eras," explored media imperialism, including how the media affects our human rights and how we view the events of the day. Bharvani says the class provided insight on how little we really know about what is going on in the world around us and why developed countries get more attention than developing countries.

The second class, "Law and Morality," focused on how human rights play into law, and when morality can or cannot be used as a factor in a case. In this class, the students did a court trial for an older Greek court case. "We put the aspects of that case (morality) into today's perspectives," Bharvani says.

Her favorite part of both the German research experience and Stanford certificate program was meeting people. As a commuter student at UW-Parkside, this was Bharvani's first experience with having a roommate. Before traveling to California, Bharvani and a student from Spain connected through Facebook and made the decision to room together for the summer.

She speaks highly of the experience and says that being on a campus as large as Stanford's, in comparison with UW-Parkside, was quite a shock. "I now have best friends in Spain, Germany, and in so many other parts of the world," Bharvani says. "I met some really great people who I now consider life-long friends. Even though it was only two months, it was two months in dorms and spending all of our time together."

As a pre-med student, Bharvani has been asked why she chose to apply for and participate in a human-rights program. "I have taken so many science courses at Parkside and I feel that the outside world is not just science-based," she says. "To have a little bit of insight into something so different was really useful. There are so many problems in the world and when I become a doctor, I will use these skills."

Bharvani dreams of working with Doctors without Borders after medi

cal school, and believes that her experiences this summer will play a large role in that future endeavor.

Now in her final year at UW-Parkside, Bharvani is applying to medical schools and waiting to hear back. The University of California Berkeley is her number-one choice. After medical school and her potential time spent working with Doctors without Borders, she wishes to work in ophthalmology. With her future a bit up in the air, Bharvani is sure of one thing: Her 2016 summer travels to Europe and California will certainly take her far.