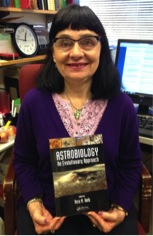 Vera Kolb has been teaching at Parkside for over twenty years. She has a PhD in organic chemistry as well as astrobiology training from the NASA NSCORT Center. She loves teaching classes on astrobiology and green chemistry. In 1992, she received the Parkside Award for Excellence in Research and Creative Activity for all her hard work. She was also inducted into the Southeastern Wisconsin Educators Hall of Fame in 2002.

Kolb was the editor of "Astrobiology: An Evolutionary Approach," which is a highly commendable accomplishment. She also wrote an entire chapter to contribute to the book called, "Prebiotic Chemistry in Water and in the Solid State."