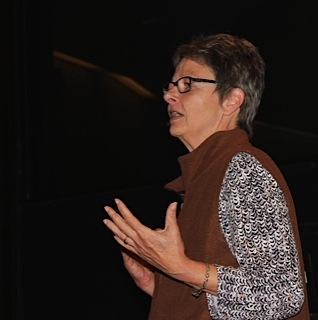 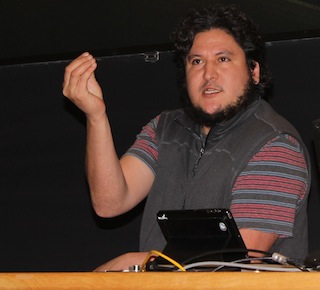 Camilo Quintero Perez, M.A., discussing the processes used in the creation of The Parkinson’s Disease Narrative Project and his own experiences with the Pasolini en Medellin project. Photo by Fay Akindes.

"A Whole Lotta Shakin' Goin' On”

“A Whole Lotta Shakin’ Goin’ On: A Rhizomatic Approach to the Parkinson’s Disease Narrative Project,” was a presentation held from 11am to 11:50am here at Parkside on Monday. Presented by the Communication Department of Parkside with funding support from the College of Arts & Humanities, College of Natural Sciences with its Applied Health Sciences majors, College of Social Sciences and Professional Services, and the Lecture & Fine Arts Committee – this discussion focused around Dr. Jenny Nelson’s approach to redefining Parkinson’s disease as a self identity, and the misrepresentations of that identity in the media.

The project began in 2010 when Dr. Jenny Nelson was first diagnosed, and she would discuss with a friend who suffered from Multiple sclerosis the distortions of their diseases throughout the media. These discussions soon led to the development of the project, focusing on rhizomatic, or network theory, approaches to see the spread of beliefs among people in regards to Parkinson’s and the people diagnosed with it.

Thus, interviews began with people afflicted with Parkinson’s. On the PD Narrative Project Blog, there are 12 episodes – each episode encapsulates a different person with Parkinson’s disease and their experiences with it. They are shown in an environment where they feel the most comfortable. Episode 2 is entitled “Chuck’s Truck,” and is the inspiration behind the further episodes of the series. Chuck felt most comfortable discussing his disease in the comfort of his truck, while a later episode – 8, entitled “Tom’s Woods,” showcased Tom running through the woods in order to increase his dopamine, and to become one with nature.

Every couple of years, those afflicted with Parkinson’s disease must take a diagnostic test to assess the progressiveness of their symptoms – rated from a 0 to a 4, these tests create a sense of dread for those taking it, a torture of seeing into a future that is out of one’s control. This project aims to dash the identity of Parkinson’s disease by strictly medical discourse. Those with Parkinson’s disease often feel the need to perform this identity, but they often seek through the use of medication to pass as normal in order to have an identity that isn’t defined by a medical condition.

Parkinson’s disease is often over-looked in the media, but has effects that are as strong as other top issues – noted by Camilo Perez, the effects of violence are parallel to the effects of living with a disease. However, Dr. Jenny Nelson has shed light on the Parkinson’s identity – giving audiences a glimpse into the reality of the disease as opposed to the minimal exposure through the media and a list of symptoms in medical discourse.

Here at Parkside, we made up the largest audience of the “A Whole Lotta Shakin’ Goin’ On,” presentation, as this discussion is a part of a short world tour. We are lucky to have been given the opportunity to learn about Parkinson’s disease, and those afflicted by it, as well as the process of creating the project. More information about future events being held at Parkside can be found here, and remember, the guest presentations we have here at Parkside are Real Amazing!