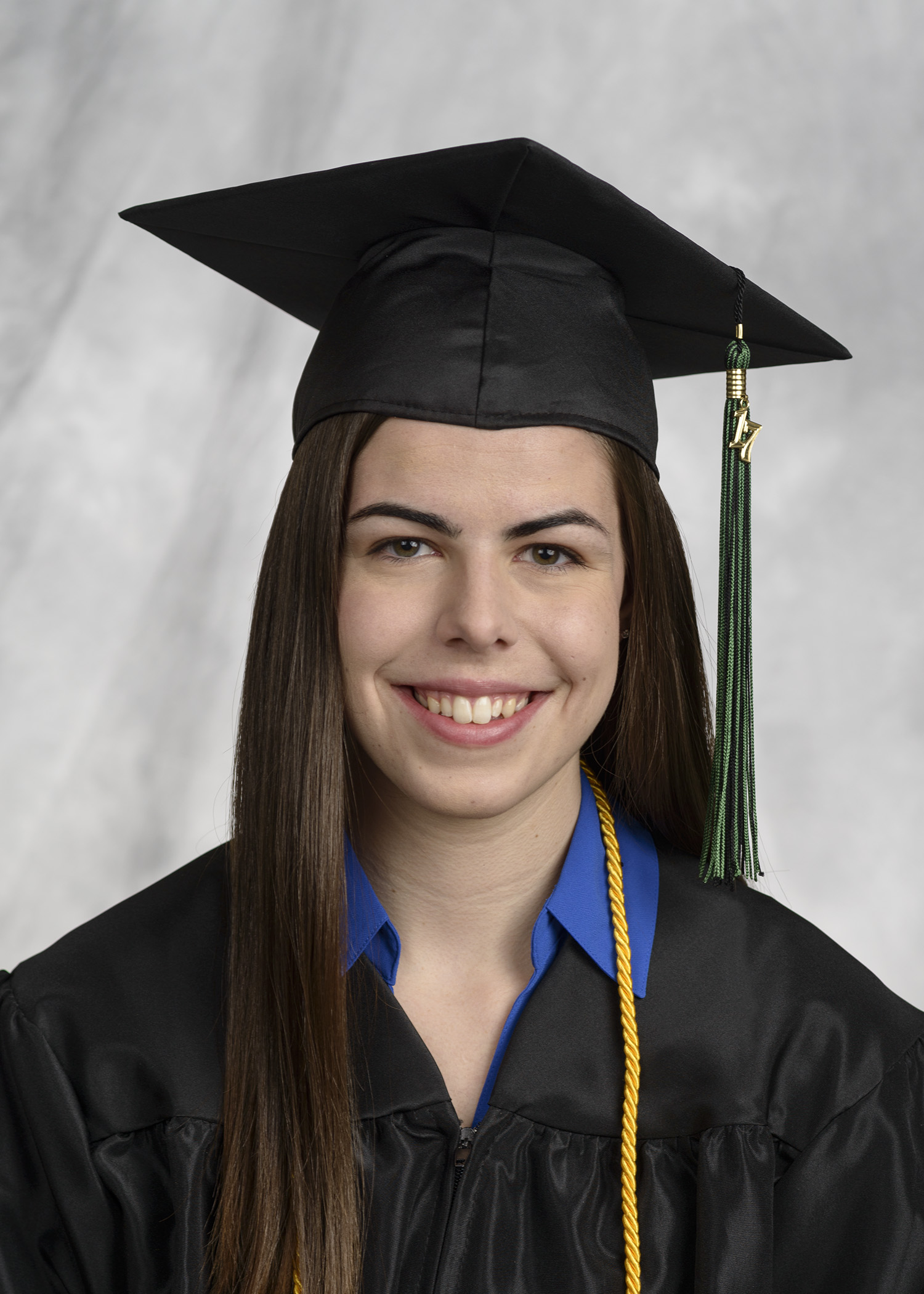 Rebecca Roembke was very familiar with the Alfred and Bernice De Simone Gymnasium, site of the Winter 2017 Commencement. After all, Roembke spent a lot of time in this space, both as a student and as a student-athlete. As a member of the UW-Parkside women’s volleyball team, she practiced here and played here many times. The things she learned as a player -- the value of hard work, constancy, instantaneous problem solving, strategic planning -- all contributed to making Rebecca the stellar performing student she is, who consistently excels in everything she does.

The fact that she earned degrees in business management and physics, was involved in several campus activities, participated in volunteer work, all while playing at the NCAA Division II level and maintaining a near perfect GPA, is amazing.

Rebecca stated, “People who knew me when I was younger used to joke and make fun of me for being so quiet. I’m sure they would have never guessed I would be the one leading ice breakers, giving tours, and teaching so many students about UW-Parkside and even getting a few groups to do the banana dance. This was by far the best job I have ever had and I loved working with all the students. I learned so much about myself through this job and it has given me the confidence that you can do anything you set your mind to.”

In her remarks to the Class of 2017, Roembke said, “Most people view difficulties as bad things, but I’ve learned to view them in a different light, and see them as opportunities to grow.” 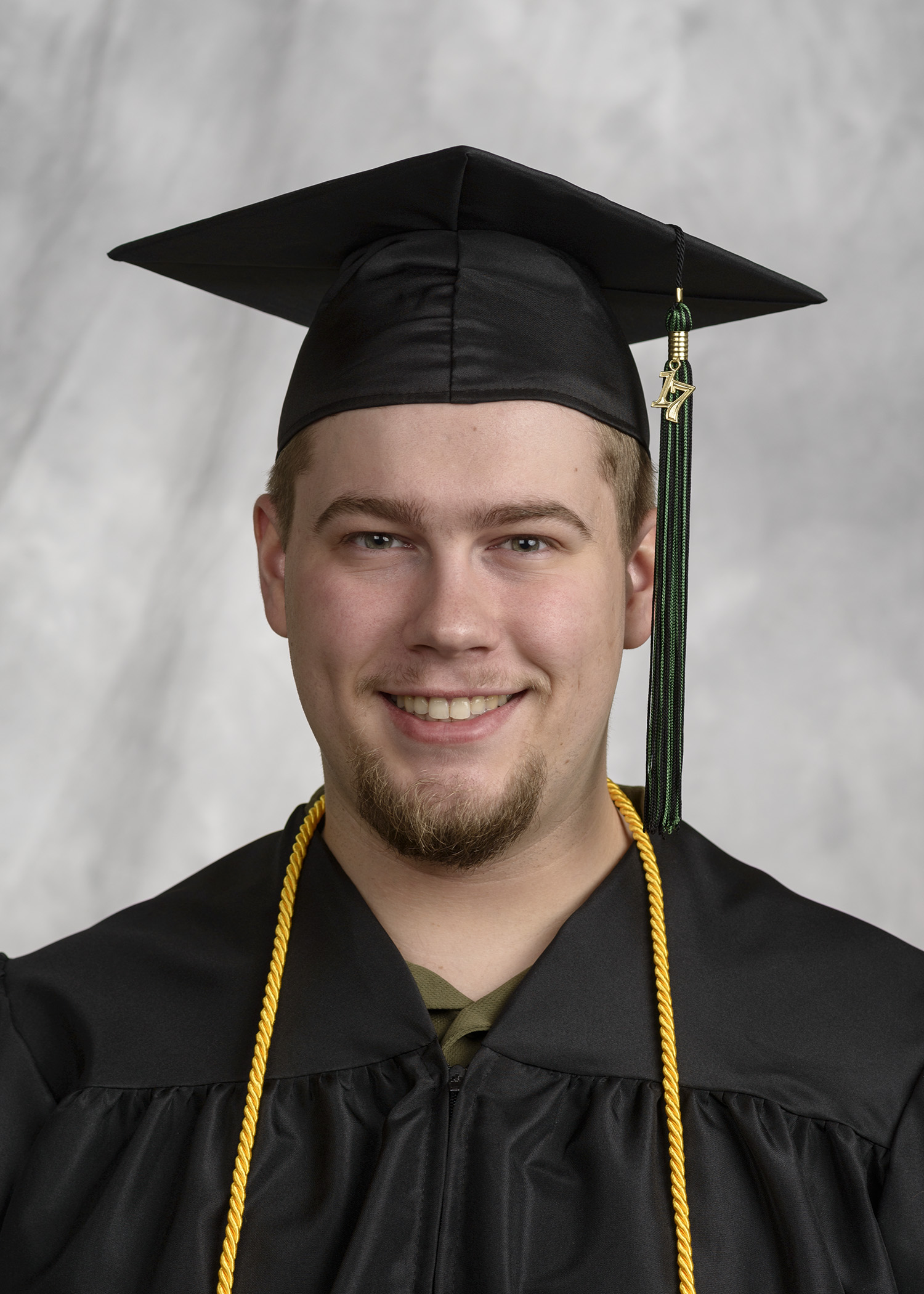 Michael Case has a deep interest in law enforcement. In addition to his near perfect GPA, he has been involved with a number of criminal justice organizations on campus, and has continuously earned the Out-of-State Distinguished Scholar Award.

Michael stated, “My academic training at UWP and job experiences have provided significant preparation for a law enforcement position. Wherever my path in the criminal justice field leads, I hope to make a difference in my small part of the enormous world.”

One faculty member wrote, “Michael has taken numerous courses with me and has consistently excelled. The courses I offer are discussion based, encouraging each student to critically analyze the course materials, and to listen in good faith to the other. I measure a student’s growth through the quality of his participation in class discussions, his comprehension of textual materials as demonstrated in his completion of weekly discussion questions and the semester long visual project. Through the years, I have observed Michael’s growth and confidence from a very quiet student sitting in the back of the classroom to one who is actively engaged both inside and outside the classroom.” 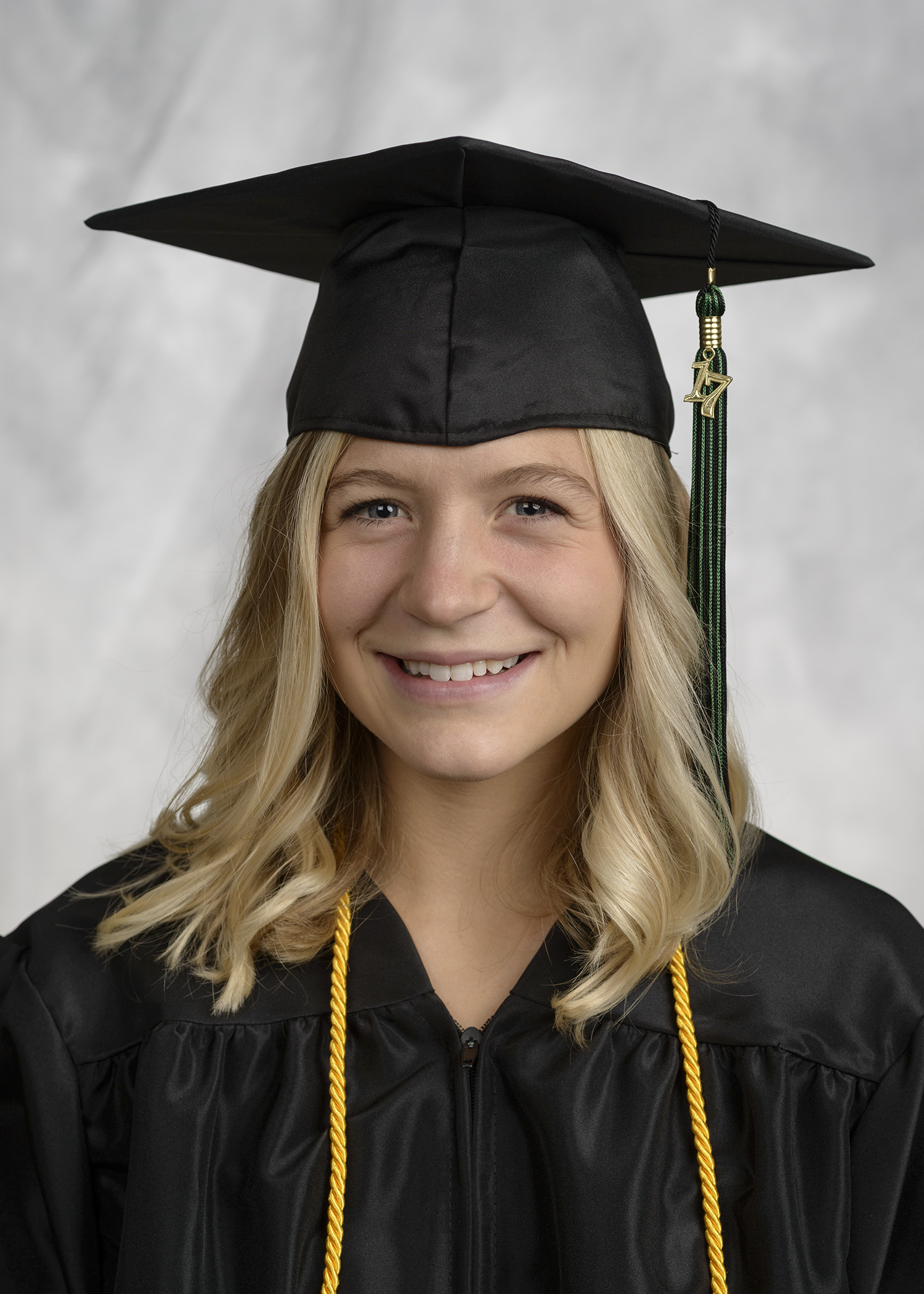 Haley Willis has managed to be a student athlete on the cross country team, balance a heavy course load, and to seize every possible opportunity the business program and university offers for personal and professional development. While working as a program consultant in the Small Business Development Center, she has had a lasting impact for many of the clients.

In addition to her many accomplishments, she has also been involved in the Parkside American Marketing Association, International Study Abroad Humanitarian programs, completed in two national and international sales competitions, and has successfully completed a sales internship with the Milwaukee Bucks. So successful that they have personally reached out to Parkside several times in an attempt to recruit her on as a fulltime employee.

Although she enjoyed her internship with the Bucks, Haley stated, “I am looking forward to the next chapter in my life as I transition to work for Uline as a sales representative. I was attracted to the company for its community and employee-centric culture, similar to what I admire most about my university. I feel confident and fully prepared for my field as a result of my experiences with the sales program.” 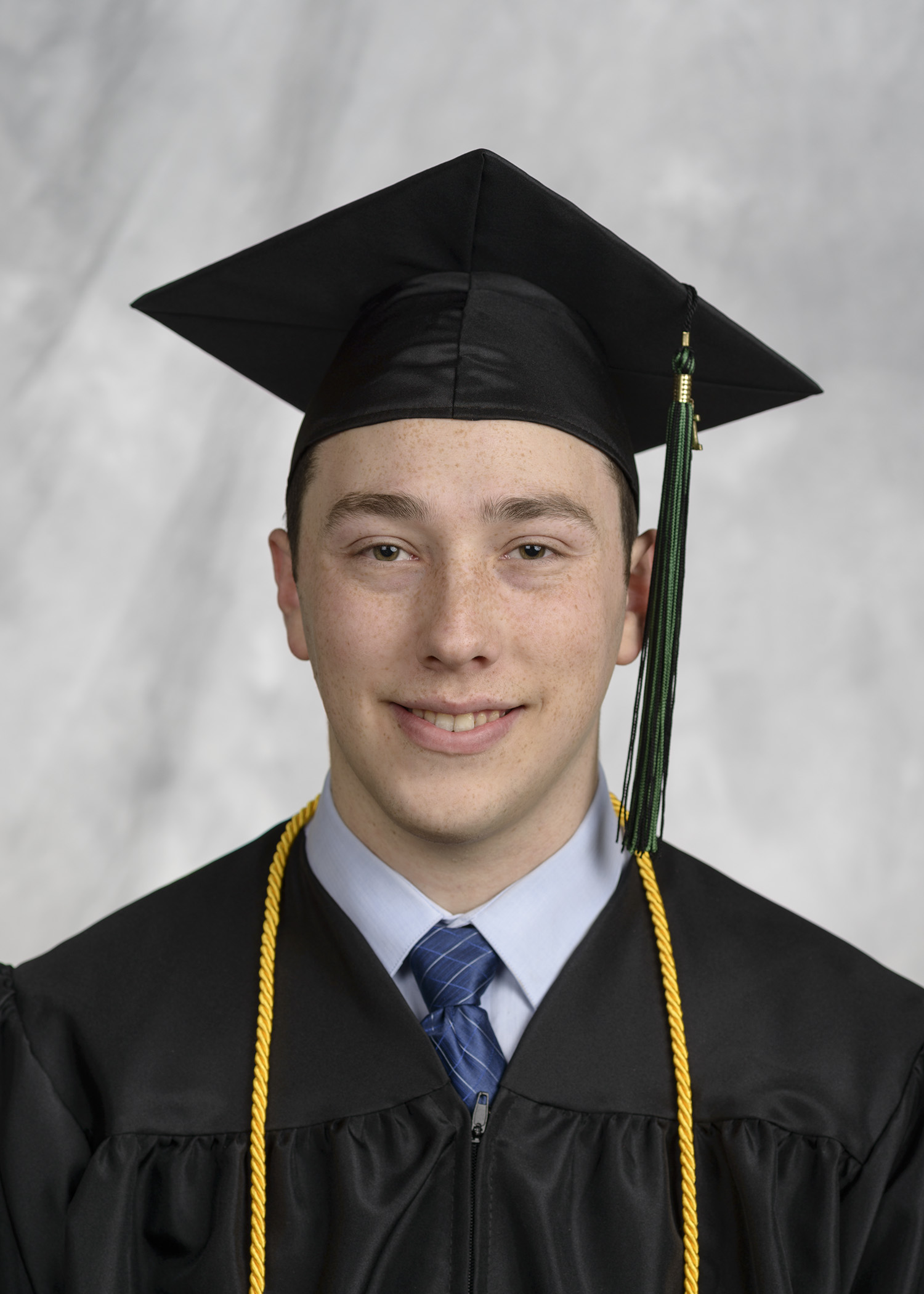 Not only is Nicholas Malcolm highly intelligent and an outstanding student, he is also a caring and compassionate individual.

Nicholas stated, “Having the opportunity to learn how to perform research in Dr. Pham’s laboratory has opened many doors for me. Over this past summer, I had the opportunity to work in Dr. Jeffrey Medin’s laboratory at the Medical College of Wisconsin. This helped solidify my passion for research involving rare genetic diseases, which is one of the focuses of his lab.”

Nicholas showed a love of science through his capstone senior research project that is rarely seen in undergraduate students. In the lab, he routinely looked up and designed experiments at his own volition.

One faculty member wrote of Nicholas, “The expertise that Nick developed through his research and his professionalism were thoroughly demonstrated during his numerous presentations at local, regional, and national conferences, including the National Conference on       Undergraduate Research. Through his presentations, Nick was able to translate his knowledge to his peers, faculty members, and the general public, highlighting the importance of his research for our general understanding of molecular biology, but especially the applications for improving human health.”

Nicole Naden (B.A. in English and B.S. in Secondary Education) 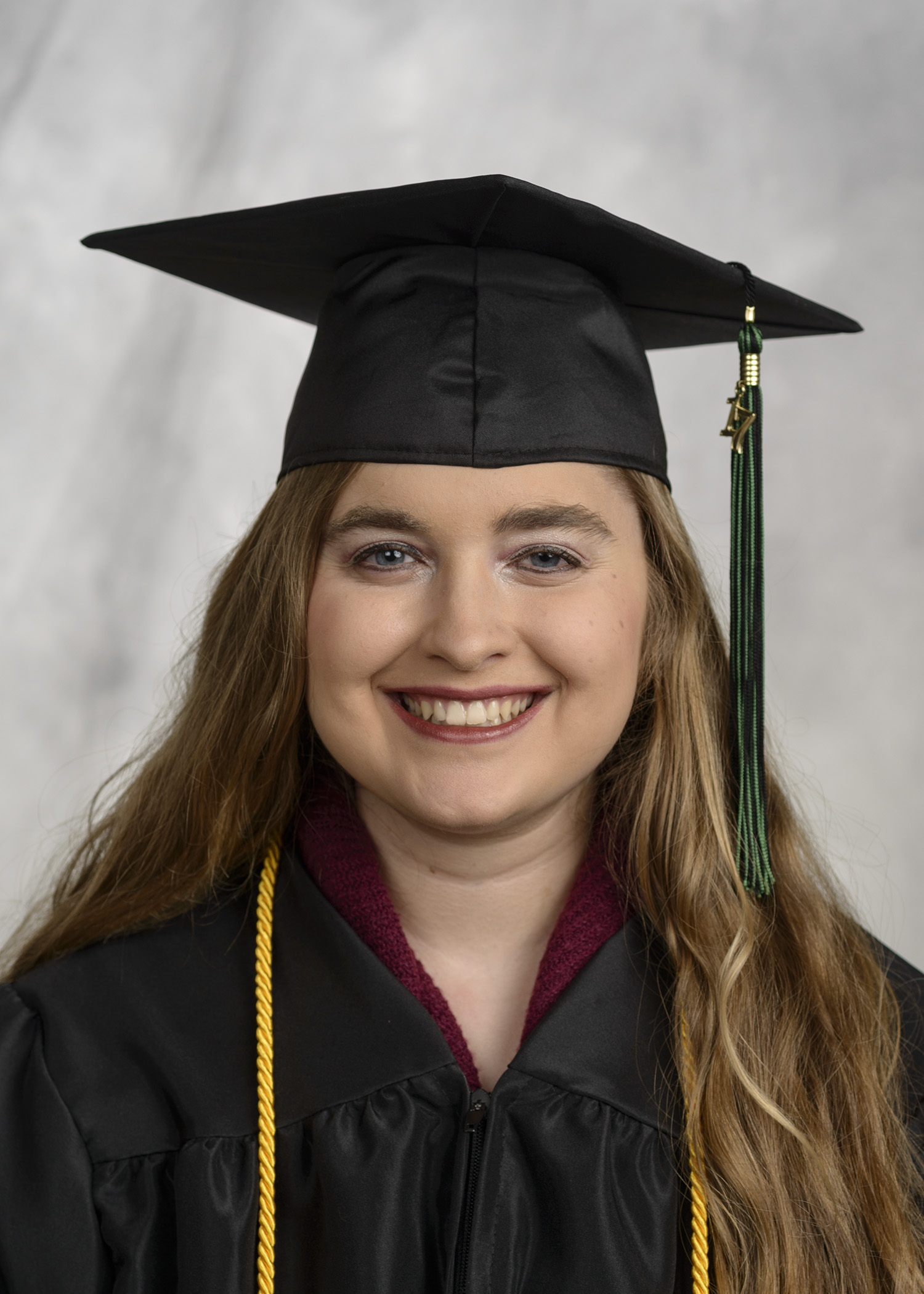 Nicole Naden is said to be an extraordinary student of languages and literatures. She left a lasting impression on many of her professors from the time they first met her.

One faculty member stated, “At our first meeting, I discussed with Nicole her interest in becoming a secondary-level English educator. She explained that, ever since she was in second grade, she aspired to teach, namely because she wanted to inspire future students to devote themselves to learning everything they could about whatever subject(s) they were drawn to.”

With this goal in mind, Nicole declared a double major in English and in Secondary Languages. In addition to that, she also declared a minor in psychology so that she could learn about the workings of the human mind, particularly the ways her future students might be mentally processing information and the emotional struggles they may be experiencing.

Not only has Nicole been involved in numerous campus activities and organizations, but she has also participated as a dedicated volunteer at PETCO, caring for the cats available for adoption. In doing so, she has spent countless hours grooming and socializing these companion animals in an attempt to ensure that they fit seamlessly into their new homes.