A Conversation With Jonah Goldberg

Sponsored by the Tommy G. Thompson Center, this Q&A Session, moderated by Parkside Political Science & Law professor Ross Astoria, will focus on Goldberg's new book Suicide of the West. Engage with Jonah Goldberg with your own questions in this unique forum about Goldberg's many literary contributions to the world of politics.

Goldberg is the senior editor for the National Review, and a prominent analyst with several New York Times best-selling books to his name, including his most recent work, The Suicide of the West. Goldberg is also a fellow of the National Review Institute and has been named as one of top 50 political commentators in America by The Atlantic magazine. In 2011, he was named the Robert J. Novak Journalist of the year at the Conservative Political Action Conference. He has written on politics, media, and culture for a wide variety of publications has appeared on numerous television and radio programs.

THERE WILL BE A BOOK SIGNING AFTER THE SESSION!

With his trademark blend of political history, social science, economics, and pop culture,  Jonah Goldberg makes the timely case that America and other democracies are in peril as they lose the will to defend the values and institutions that sustain freedom and prosperity. Instead we are surrendering to populism, nationalism and other forms of tribalism. 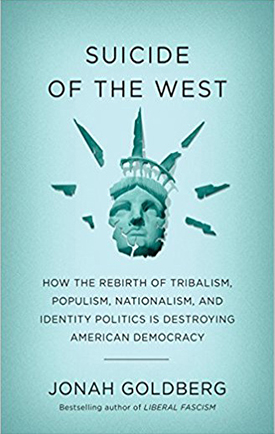