Honorable Katherine Grace Leonard serves as the Associate Judge, Intermediate Court of Appeals, for the  State of Hawaii. Judge Leonard has served on the Hawaii Intermediate Court of Appeals from January 30, 2008, to the present. She presides over appeals from virtually every trial court in the State, as well as many agency proceedings. She has decided well over 1,000 appellate cases on their merits and many thousands of motions.

Prior to joining the bench, from 1992 to 2008, Judge Leonard was in private practice with Carlsmith Ball LLP. As a Carlsmith partner, she worked on complex commercial, financial, real estate, environmental, trust, and business law litigation, and alternative dispute resolution. She participated in jury and non-jury trials, appeared at all levels of the Hawaii state and federal court systems, including land court, tax appeal court, probate court, bankruptcy court, and appeals courts, as well as before administrative agencies, mediators, and arbitrators. Judge Leonard also served as a law clerk for one year, from 1991 to 1992; roughly half of her clerkship was at the trial court level, with the other half at the Hawaii Supreme Court.

Judge Leonard serves on the Hawaii Supreme Court's Commission on Professionalism (2013 to present). She previously served on the Hawaii Access to Justice Commission's Review Committee for Hawaii’s Strategic Action Planning Proposal, and formerly chaired the Hawaii Access to Justice Commission's Hawaii Rules of Professional Conduct Rule 6.1 Task Force. She volunteered as a Court Annexed Arbitration Program Arbitrator from 1998-2007. Leonard was admitted to practice before the Supreme Court of Hawaii and U.S. District Court of Hawaii in 1991, the Ninth Circuit Court of Appeals in 1999, and the U.S. Supreme Court in 2002.

Kate Leonard has been actively involved with the Boy Scouts of America for over a dozen years. She is currently an Assistant Scoutmaster with Aloha Council, Troop 1, and a Merit Badge Counselor (for the Citizenship in the Nation, Citizenship in the Community, Citizenship in the World, Law, Personal Management, and Family Life badges). She engages in various community service, including volunteering for: We the People State Competitions, Hawaii High School Mock Trial Competitions, (various) moot court competitions, Judiciary Speakers Bureau (community education) engagements, the Judiciary History Center's Hawaii Children & Youth Day Programs, and numerous scout service projects. She enjoys participating in the Honolulu Orchid Society. Born in Fond du Lac, Wisconsin, she is married to Ian L. Sandison, and has three adult children (including two stepchildren).

Kate Leonard has maintained strong ties to her Wisconsin roots, traveling there as often as possible to visit family and friends and to enjoy Wisconsin's natural beauty and culture. 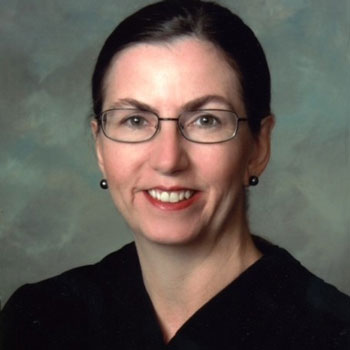 I grew up in Racine. Parkside was nearby and affordable.

I mostly studied, socialized, and worked off campus. I was active in some of the environmental andsocial justice organizations of the day. I spent as much time as possible in the Parkside greenhouse and when I wasn't working or studying, I liked to hang out in the student union with my friends.

In every way. My Parkside experience was the foundation upon which I built my life. I made friendships that time and distance could not diminish. I learned how to learn. Although my professional life eventually took another turn, the love of science that was deeply instilled in me at Parkside has shaped my life and continues to be a defining part of my daily experience.

Working with my amazing law clerks at the Intermediate Court of Appeals and following theirsubsequent law careers and their lives. Most, but not all, of my law clerks have been recent school graduates. Some grew up in Hawaii and others came from all across the U.S. They bring varied backgrounds, experiences, and interests. However, they have all been bright, hard-working lawyers who have helped me be a better judge.

Tell us about someone who influenced your time at UW-Parkside.

The people who influenced me the most were undoubtedly people I never met - the ones who decided that all students should take breadth of knowledge requirements and be highly proficient in the basic skills of reading, writing, and math. I was still very much in the process of growing up, and I appreciate their unseen hands, pushing me in directions I might not otherwise have gone. Dr. Eugene Gasiorkiewicz, my horticultural botany professor, deepened my love of the natural sciences and inspired me to pursue my passions. My Parkside friends K. (Thompson) Kotleski, Ann Salerno, Pam (Jepson) Heitschel and others who will remain nameless, encouraged me to keep going, when I did not think I could do it.

I was not a particularly distinguished student at Parkside. I struggled to balance working and studying and trying to figure myself out. Yet, Parkside was a place I loved to go and sit, read, study, think and dream.

I am profoundly grateful for my Parkside education and experience. Nearly four decades after graduating from Parkside, I find myself living an amazing life. In addition to my wonderful career, family, and comfortable home, I am still living my orchid dream. None of my professional achievements would have been possible without the solid education I received at UW-Parkside. Thank you UW-Parkside!