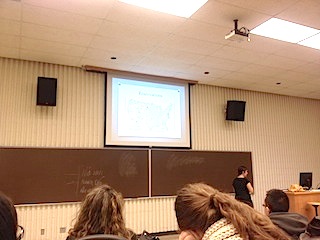 Heather Kind-Keppel discussing the history of Native Americans and their culture.

The Speak Out: Native American Culture event was held this Wednesday with speaker and Mohawk member Heather Kind-Keppel at 12 pm. Ms. Kind-Keppel's motivation was to inform students about the history of Native Americans in the United States and the difficulties they have faced and to give a new perspective on what it means to be Native American.

Heather Kind-Keppel began by sharing some shocking statistics about the reality of Native American hardships such as their greater rate of poverty than any other race group and that less than 1% take place in higher education. She believes that it is important for us as a community to understand these statistics, look further into them, and strive to change because it is our responsibility to make our world a better place. While there are 566 federally recognized tribes, they are classified into "reservations" largely due to the Indian Reorganization Act of 1934, as described by Ms. Kind-Keppel. Native American children were also sent into boarding schools, which sought to remove their native culture and re-socialize them into the ideal student and community member of the time period.

Some modern approaches have made improvements for Native American culture, such as the Indian Art and Craft Act of 1990, which prohibits the misrepresentation of Indian arts and crafts in the United States, and groups such as the 1491's have taken shape in the media, which portrays modern Native American comical opinions on their current issues and state of affairs. However, we must seek to further these improvements and negate the old-fashioned mindset of what a real Native American is or looks like.

Lastly, Heather Kind-Keppel wants us to seek artwork and culture from "inspired natives, not native inspired." She urges that one does not equal the other and that numerous inspired natives are coming out in modern times to speak out about their culture and experiences. This event was just one of many events taking place during Native American Heritage Month. Next up is Speak Out: "Debunking Thanksgiving," which will be a discussion about the misconceptions regarding Thanksgiving with Heather Kind-Keppel as well, taking place at 12pm on November 17 in Molinaro 107. You are invited to attend this, or other upcoming events, and see why our diversity experiences here at Parkside are Real Amazing!
Scroll to top
Who Are You?