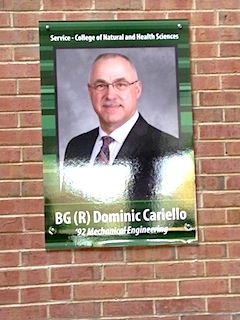 BG Dominic Cariello on the halls of Greenquist in UW-Parkside.

Dominic Cariello is another esteemed member of our alumni as a part of our “Faces On The Wall” series, graduating with a bachelor’s degree in mechanical engineering from Parkside, and then receiving a master of strategic studies degree from the United States Army War College. Cariello has carried the education he received from Parkside, and has translated that to his long-standing career as a part of the military.

With more than 30 years experience as an officer in the 57th Field Artillery Brigade, he was a commander for the Hurricane Katrina relief and was selected to be the commander of the Task Force Wisconsin Forward 23 Embedded Training Team and was deployed to Afghanistan. His vast experience in the military has gained him several awards and medals, such as the Bronze Star and Legion of Merit.

As a civilian, Cariello serves on the Board of Directors for RAMAC and the Racine United Way, and is a father of two children, one of which recently graduated from UW-Parkside as well. Dominic Cariello’s experiences at Parkside helped aid him to become the great success he is today, both as a part of the military and a citizen of Wisconsin.

Check out Dominic Cariello’s full story here, and stay tuned for the remainder of our “Faces On The Wall” series, and our announcement of the 2015 Traditions of Excellence Honoree’s. Our alumni here at Parkside are Real Amazing!