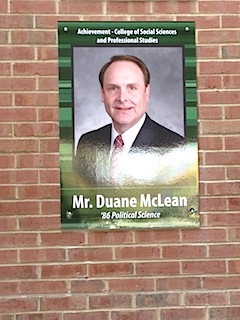 Mr. Duane McLean on the walls of Greenquist Hall

For the past 28 years, Mr. Duane McLean has carried his bachelor’s degree in Political Science from Parkside, and a master’s degree from the University of Oklahoma, into a career riddled with success and excitement in the entertainment industry. While he was at Parkside, he was captain of the baseball team, so it is no wonder why he works for the Major League Baseball team, the Detroit Tigers, today.

Prior to McLean’s experience with the Detroit Tigers, he has also held positions with the National Basketball Association’s Detroit Pistons and Houston Rockets, as well as the National Football League’s Seattle Seahawks. Mr. Duane McLean has a career that is seriously ingrained into the sports world.

In his current position as Executive Vice President of Business Operations for the Detroit Tigers, Mr. Duane McLean has been instrumental in the creation of the Detroit Tigers Foundation, which has awarded more than 8 million dollars to the Detroit community. In addition, under his supervision in 2013, the Tigers drew more than 3 million fans to Comerica Park for their home games, a feat that has only been accomplished 4 times in the teams’ 114-year history.

While Mr. Duane McLean’s sports entertainment career stands as a tradition of excellence alone, he also serves on the board of directors for the National Kidney Foundation of Michigan and has raised 3 children with his wife Susan. Leading a busy life both on and off his career successes, we are proud to have Mr. Duane McLean as part of our prestigious alumni here at Parkside.

To read Mr. Duane McLean’s full story, check it out here, and don’t forget to tune in to more of the “Faces On The Wall” Series, and our future Faces when we announce our 2015 Traditions of Excellence Honorees. Our alumni here at Parkside are Real Amazing!