April was Sexual Violence Awareness Month and the University of Wisconsin-Parkside hosted several events designed to increase awareness about sexual assault and domestic violence. Wednesday, April 26, the university hosted the "Peace Paper Project: Panty Pulping" in the Student Center Plaza. Master papermaker Drew Matott showed the audience how to turn intimate clothing into paper. After completing their masterpiece, they signed a pledge of non-violence.  The workshop was open to all students, as well as the public.

UW-Parkside Art Gallery Director Amanda Brown was very motivated to bring the Peace Paper Project and Panty Pulping to campus. Her main goal was to use art to take a stand and give people a chance to create dialogue. Premade stencils allowed students and community members to place empowering images and messages on their handmade paper.

Brown said, "For me, art is not just a pretty picture. It's a way of approaching an issue. This is something that is not talked about. This project is a way of generating awareness."

Some students at the event became emotional as they responded to questions as they themselves were victims of sexual assault.

"It's important to me because sexual assault is a really big issue and a lot of people don't like talking about it," said one student. "It's happening around us. A lot of people experience sexual assault, whether it be minor or major, everybody somehow knows someone that has been through it. And I think that if we start promoting awareness, even creative projects like this, you're getting the word out and making it more okay for others to talk about it." 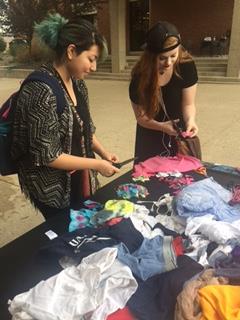 Many of the students believed that having more creative or artistic workshops like Panty Pulping is a way of bringing awareness to more "off limits" topics such as sexual assault and domestic violence. Initially developed by Peace Paper Project co-founder Margaret Mahan as a cathartic exercise after she was sexually assaulted, the Panty Pulping project has traveled to numerous college campuses to help spread awareness of sexual and domestic violence and promote a culture of consent.

In the centuries-old practice of using cast-off clothing for papermaking, the project takes our most intimate of garments, our "unmentionables," to give voice to an often unspoken issue. Read more about the Peace Paper Project.

Another student said: "I think having projects like this where you get to draw people together in one creative outlet, and being able to sit down and talk about it, and sit down and do something fun while you're talking about it, kind of takes the taboo away from the conversation. And that's really important to me."

Peace Paper Project uses papermaking and printmaking as a form of social activism and engagement. Panty Pulping calls for an end to sexual assault and domestic violence in all forms. The goal is to transform underwear into paper art as a means of addressing the "unmentionable." The project promotes consent, nonviolence, and creative expressions of resilience through papermaking by hand.